Police release sketch that illustrates one of the three assailants 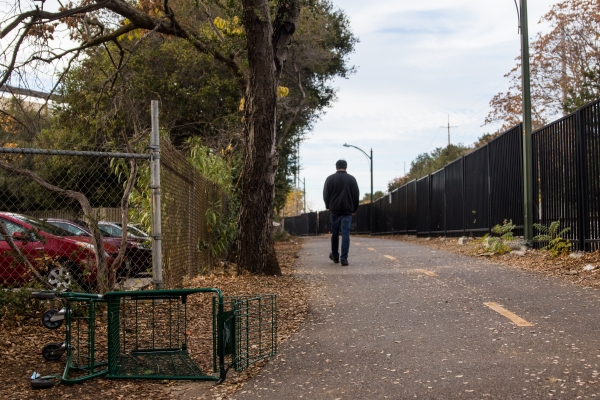 A pedestrian walks along the bike path parallel to the Caltrain tracks near Encina Avenue, close to the site where a man was beaten and robbed on Nov. 23, 2018. Photo by Veronica Weber. 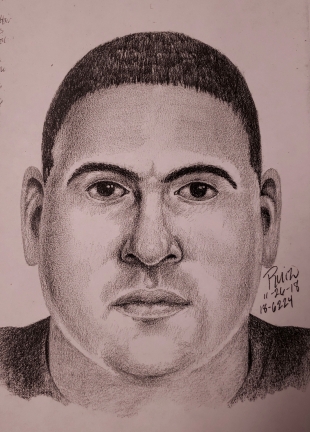 The man depicted in the sketch above physically attacked a man during a strong-arm robbery on the Embarcadero Bike Path on the night of Nov. 23, 2018. Image courtesy Palo Alto Police Department.

There have been several reports of pedestrians being beaten and/or robbed near downtown this year. Part of the problem is that many of the popular pedestrian routes are very dark at night and pedestrians cannot see robbers hiding in the shadows. This applies both to bike paths like this one and some of the quiet streets south of downtown where there are tall bushes or fences on the residential side of the sidewalk and tall SUVs on the street side of the sidewalk. We really need to find ways to light up these sidewalks more to make them safer. Also, increase police patrols of pedestrian routes by police on foot or on bicycles, since these paths are difficult to see from patrol cars. This robbery was at 8pm when people are walking home after work or after dinner downtown. We can't encourage people to walk and bike to work if the sidewalks and bike paths are really dangerous. Again, this was not the first pedestrian robbery near downtown in recent months.

R.Davis is a registered user.


Criminy. They didn't have to physically hurt the guy. Being robbed was bad enough.

QUOTE: This robbery was at 8pm when people are walking home after work or after dinner downtown. We can't encourage people to walk and bike to work if the sidewalks and bike paths are really dangerous.


I was born and raised in Palo Alto and am back visiting my mother who still resides in our home.
Every time I return to Palo Alto and read about assaults I am more convinced about my decision to live in Colorado. In Colorado we rarely have these random assaults as citizens have the right to open carry firearms and the ability once vetted to receive a concealed carry permit.
[Portion removed.]

Report Objectionable Content
Email Town Square Moderator
35 people like this
Posted by Flyboy
a resident of Crescent Park
on Nov 26, 2018 at 11:00 am


I know that there are those that will find my previous comment offensive and "red neck". But the reality is "guns don't kill people, people kill people". The truth is if someone want's a gun to aid in a crime they will attain one no matter what laws on on the books. I conceal carry my weapon to Church every Sunday with the blessing of the Church staff.

Report Objectionable Content
Email Town Square Moderator
15 people like this
Posted by sgartner@ix.netcom.com
a resident of Midtown
on Nov 26, 2018 at 1:45 pm

sgartner@ix.netcom.com is a registered user.


Well, I don't agree with your world view, Flyboy, nor your rather juvenile "make my day" fantasy. But boy am I glad for the 1st Amendment, giving you the right to express your views on a street corner, online, in a newspaper's letter to the editor, etc.

Report Objectionable Content
Email Town Square Moderator
17 people like this
Posted by Mimi Wolf
a resident of Midtown
on Nov 26, 2018 at 7:37 pm

Mimi Wolf is a registered user.


Every time I approach even the downtown library, the police station and especially the bench at Forest and Gilman I remember Bert Kay. Heartbreaking, senseless murder Web Link

Report Objectionable Content
Email Town Square Moderator
14 people like this
Posted by ‘82 Paly Alum
a resident of Palo Alto High School
on Nov 27, 2018 at 1:41 am

‘82 Paly Alum is a registered user.


If we could be a gated community, it would be like growing up in the 70s and 80s again: virtually no traffic, no crime, no assaults or men exposing themselves to children. In elementary school, we’d skateboard or bike all over town with no fear of being hit by a car, or we’d take the bus to Mayfield Mall or Stanford mall. These criminals are all non-residents who view our city as a candy store. Sigh.

Rebecca Eisenberg is a registered user.

You are wrong about crime in the '70's and 80's. There was a lot of crime then. Numerous cites exist to prove you wrong, but I will point you to a recent article on this very website: Web Link


I appreciate sgartner's comments and his views, however in Colorado "Make my day" is a law on the books. While in my home in Colorado if someone breaks in and I fear for my life I am justified to defend myself by lethal force. Not the greatest of outcomes for the perpetrator but to protect me and my family so be it.

Anne Le Ziblatt, formerly of Tamarine and Bong Su, is back with a Vietnamese noodle bar in Redwood City
By Elena Kadvany | 7 comments | 3,772 views

You Can Help: Scents and Migraines
By Chandrama Anderson | 0 comments | 1,204 views