Around Town: Storytime; leaving a legacy

Tidbits on people, events and other happenings in Palo Alto 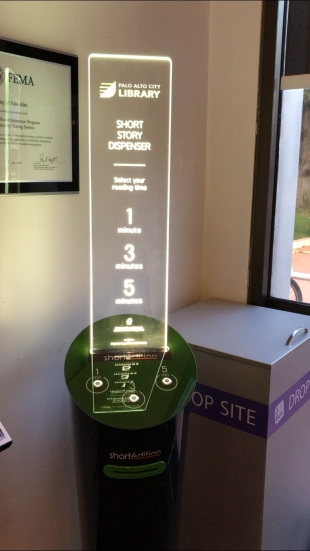 The Short Story Dispenser, which was recently installed in the City Hall lobby, allows users to instantly print out a short story that takes one-, three- or five-minutes to read. Photo by Gennady Sheyner.

In this week's Around Town column, learn about a new literacy tool stationed at Palo Alto City Hall and a longtime executive director announcing plans to retire by the end of the year.

STORYTIME ... The word "dispenser" is typically associated in the popular imagination with paper towels, hand soap or Pez candy. But if you've visited Palo Alto City Hall lately, you may have seen an unusual new device in the main lobby, next to the Revenue Collections area: a short-story dispenser. The slim kiosk allows visitors to print out, for free, a short story that they can then take with them or read as they wait to pay their parking ticket. With a push of one of three buttons, a visitor can choose between a five-, three- or one-minute story, which seconds later emerges from a slot much like a gas-station receipt. The offerings include poetry and prose, contemporary and classical, heavy and light. On a recent visit to a council meeting, this reporter was treated to the poem "To Althea, from Prison" by Richard Lovelace (1618-1657) and a short story called "Hey Dad" by Jeremy Riou, which lays out a conversation about love between a child and a father. According to the city, the short-story dispenser — an offering from City of Palo Alto Library — will be traveling next year to other locations where people gather or wait for services. "The hope is this new literacy tool will help strengthen community, promote reading and provide avant-garde entertainment," the city's announcement states.

LEAVING A LEGACY ... The Vista Center for the Blind & Visually Impaired will soon find itself at a point of transition with Executive Director Pam Brandin's retirement on Dec. 31 after 24 years. Under her leadership, the center has grown to serve more than 3,000 families in San Mateo, Santa Clara, San Benito and Santa Cruz counties. She also saw the organization through a merger with the Doran Center in Santa Cruz and acquisition of the Santa Clara Valley Blind Center, which will be finalized this month. "It has been my great pleasure to work side by side all these years with a highly skilled and deeply caring team of staff and board members whose commitment to Vista Center, its mission and its clients is remarkable and inspiring," Brandin said in a press release on Tuesday. "I have also had the privilege of getting to know so many — clients, volunteers, donors, other professionals and community partners." Before taking the helm at the organization, Brandin was a part of the organizing committee for Vintage Affaire, the annual wine and gourmet food auction benefiting the Palo Alto-based center. The center is close to wrapping up its process of bringing a new executive director on board. "I look forward with excitement to watching Vista Center continue growing and thriving under a new leader who will bring a different perspective and life experience to the job while keeping our unique mission and values close to his or her heart," Brandin said.

Like this comment
Posted by Claude Ezran
a resident of Leland Manor/Garland Drive
on Oct 30, 2018 at 10:57 pm

Palo Alto Weekly staff, you are using the wrong word in your story: it is not a "literacy" tool, it is a "literary" tool.

^ around here it could well be a literacy tool.

A Pragmatic Approach to A Trillion Trees
By Sherry Listgarten | 1 comment | 2,241 views

The University of California’s flexible policies during COVID-19
By John Raftrey and Lori McCormick | 6 comments | 1,869 views

Repairing a Disagreement with your Beloved & “Physical” vs. “Social” Distancing
By Chandrama Anderson | 0 comments | 1,208 views