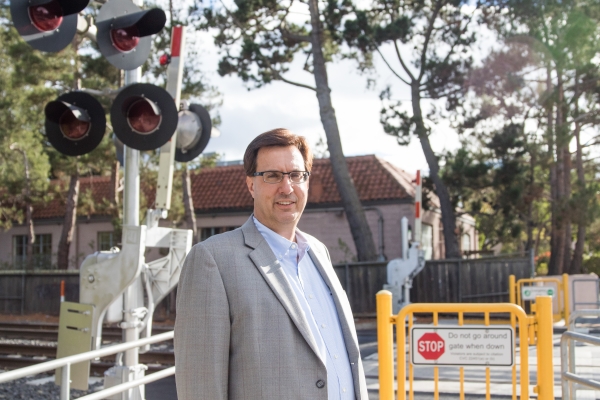 Incumbent council candidate Tom DuBois, standing beside the Caltrain crossing at Churchill Avenue in Palo Alto, says he would focus on working with regional agencies to redesign the rail crossings if he's re-elected. Photo by Veronica Weber.

For Tom DuBois, the past four years on the Palo Alto City Council have been the best and worst of times, in that order.

Elected in 2014 as part of the new "residentialist" majority favoring slower city growth, DuBois is proud of the council's record in the first two years of his tenure. During that period, the council created a new law to protect ground-floor retail shops throughout the city; instituted an annual cap on new office space for downtown, California Avenue and El Camino Real; and adopted the highest affordable-housing impact fees in the state.

But the 2016 election brought Adrian Fine and Greg Tanaka to the council and tilted the council toward the faction favoring more city growth. Since then, DuBois has had to strike a balance between moving ahead with his legislative priorities — including passing ordinances that protect renters and limit new commercial development — and criticizing the actions of the five-member majority, a role that he has undertaken with particular gusto.

Today, the Ohio native is generally aligned with Vice Mayor Eric Filseth, and Councilwomen Karen Holman and Lydia Kou, all of whom had been endorsed by the political action committee, Palo Altans for Sensible Zoning. But while Filseth (who is also seeking re-election) has moved toward the middle and at times sided with the pro-growth council members, DuBois has remained steadfast in his role as leader of the resistance.

The contrast between the two was particularly apparent on Jan. 8, when the council unanimously selected Liz Kniss to serve as mayor for 2018. Filseth made the motion to nominate Kniss and lauded her experience and wisdom; DuBois observed that Kniss remains subject to an investigation into her 2016 campaign finances by the state's Fair Political Practices Commission and urged the council to "reconsider its vote, once the facts are in." (The investigation remains open, nearly two years after it was launched.)

"I do think we owe it to the community and to the institution of the Palo Alto City Council to maintain the level of standards the community demands," DuBois said at the meeting.

DuBois has not been shy about expressing his dismay with the actions of the new majority, including its March 2017 reversal of the prior council's decision to raise housing-impact fees (the majority led a 5-4 vote to effectively nullify that decision and adopt more modest increases) and its removal of all parking requirements for accessory dwelling units (an action that was also approved by a 5-4 vote). Perhaps DuBois' most significant outcry happened when the freshly reconstituted council took a series of 5-4 votes on Jan. 30, 2017, on the city's Comprehensive Plan, including to eliminate the downtown cap on non-residential development and, most controversially, to strip all policies out of the document. DuBois responded immediately by penning an op-ed, published in the Weekly, titled "When democracy is hijacked."

Today, DuBois has no regrets about this accusations. The council, he noted, ultimately reversed course and restored the Comprehensive Plan policies. And he remains as concerned as ever about the current council's approach to governing.

"I do think some members of the council may approach it kind of more as a debate to be won rather than seeking compromise or reasonable solutions," DuBois told the Weekly. "I've been concerned, particularly in the last two years, about late-night rash decision-making that really hasn't been vetted by staff or discussed very much at all, as opposed to our more typical process, which is to introduce an idea, maybe discuss it with staff, have them do some analysis and make a decision."

His critics would be quick to point out that he's been suspected of playing a little political gamesmanship himself, however. On Aug. 27, for example, the council considered a revised version of the memo on renter protections that he, Kou and Holman had initially submitted last year (the council rejected it in October 2017 by a 6-3 vote). This time, the memo steered clear of any measures relating to "rent control" (or "rent stabilization"); it also had a new co-signatory, Councilman Cory Wolbach.

The council ultimately voted 7-1 to adopt the memo, but not before a series of sharp disagreements and failed amendments. The most significant one, proposed by DuBois that evening, called for rent stabilization and a requirement for just-cause evictions to be among the policies that the city would explore. It failed 4-4, with Kniss recusing herself.

DuBois told the Weekly that his proposal to include these policies was "something I decided to do that evening." He had not discussed it with city staff or his colleagues. In retrospect, he concedes, mentioning it ahead of time "probably would have been a better thing to do." He also, however, criticized his colleagues on the other side of the dais of "gamesmanship" for their own conduct during the discussion, including an amendment by Councilman Greg Scharff to explore renter protections for all properties with two or more units (as opposed to those with 50 or more units, as was initially proposed).

Aside from engaging in political wrangling, DuBois often talks — much as his colleagues do — about the need to tackle the city's shortage of housing. However, unlike the five more-pro-growth members, who generally support both market-rate and below-market-rate housing, he is laser focused on the latter. Though he opposes reviving the city's "planned community" (PC) zone, which allows developers to negotiate with the city to create customized zoning districts for their projects, he said he would support a new zoning district specifically for 100 percent below-market-rate housing projects. (This would be in addition to the city's recently approved affordable-housing overlay zone.)

He also would like to see a revision of existing zones that currently allow "mixed-use" projects so that these projects would be required to include more residential and less office space. These types of projects would be particularly suitable downtown, where he notes very few residences have been built in recent years, aside from a handful of giant penthouses.

Overall, DuBois has taken a moderate, get-it-done approach as housing issues have come before the council: He consistently voted in favor of reforms to accessory-dwelling-unit ordinances, despite his criticisms of the council's move to eliminate required parking. To encourage construction of granny units, he voted to eliminate a "lot size" minimum for property owners looking to build them. He also voted to support the adoption of the city's Comprehensive Plan; to approve a workforce-housing development of small apartments at 2755 El Camino Real; and to create a new affordable-housing zoning district. His two most steadfast council allies, Karen Holman and Lydia Kou, dissented in all three cases.

DuBois' support for housing is by no means unconditional. In 2013, he and Filseth both opposed a PC zone that would have permitted 60 apartments for low-income seniors and 12 single-family homes on former orchard land on Maybell Avenue. His opposition, he said at the time, wasn't to affordable housing but to the city's decision to place a dense development in a neighborhood of single-family homes and to "pack in" a dozen market-rate houses. Whatever his motivation, that project fizzled in a 2013 referendum, and the land is now being redeveloped with 16 single-family homes.

DuBois in his policy leanings has also been cognizant of the interplay between commercial and residential development. He criticized the council's removal of a downtown-specific limit on non-residential development, which he said had the effect of encouraging exactly the type of growth that the council is looking to slow down. At a recent debate sponsored by the Palo Alto Rotary Club, he argued that the impact of that has been to "allow new commercial development downtown in places like President Hotel, where I think we really should be looking to encourage more residential."

The contrast between DuBois and the council's five-member majority is particularly stark when it comes to issues like renter protections and commercial growth. Earlier this year, DuBois was the first council member to publicly support a citizen initiative to lower the long-term cap for non-residential growth from 1.7 million square feet to 850,000 square feet. The initiative was set to go to the November ballot when the council decided on July 30 by a 5-4 vote to adopt it outright, with Wolbach surprising many by joining DuBois, Filseth, Holman and Kou to adopt the new policy.

That policy victory notwithstanding, DuBois said he remains very much concerned about the division on the council and the majority's conduct, particularly when members "ram things through" without proper outreach or analysis.

"That's one of the reasons I want to run again," DuBois told the Weekly. "The council needs thoughtful, reasoned voices on the council."

A Pragmatic Approach to A Trillion Trees
By Sherry Listgarten | 1 comment | 2,883 views

The University of California’s flexible policies during COVID-19
By John Raftrey and Lori McCormick | 6 comments | 2,075 views

Repairing a Disagreement with your Beloved & “Physical” vs. “Social” Distancing
By Chandrama Anderson | 0 comments | 1,615 views