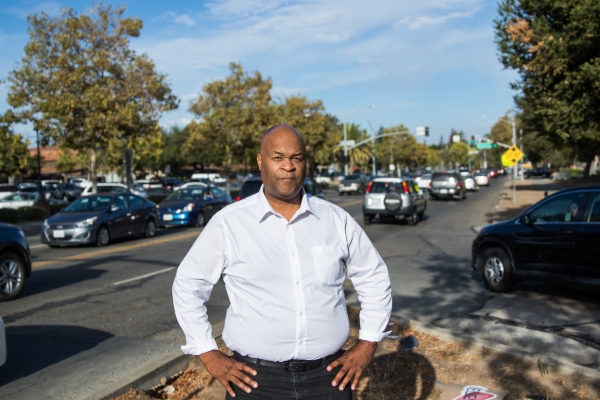 Pat Boone is normally full of energy, but ask him about traffic and he'll tell you he's tired: tired of the clogged highways and the jammed arterials; tired of telling people that he's on his way and then arriving late.

"I'm tired of yelling and screaming at my windshield when no one is there to hear it, and I want to make a difference," Boone said.

Boone is relatively new to Palo Alto, having lived here for only two years, but he may look familiar to local residents: He's been on TV, breaking down local news as a TV reporter for NBC Bay Area. It was his frequent trips to Palo Alto for news coverage that made him fall in love with the city, he said, prompting him to move here.

As a newcomer, he is quick to admit that he is still refining his positions on city issues. When he announced his bid for City Council in July, he proposed exploring a "contraflow" approach to Palo Alto's traffic problems — a method in which one or more lanes is flipped into the opposite direction to boost capacity. Could this method — which is typically associated with disaster evacuations — be used on University Avenue or Alma Street, Boone asked?

After consulting with traffic experts, Boone has since concluded that the answer is "probably not."

Other than trying to untangle the traffic conundrum, he strongly supports increasing rental protections and believes the city should do a lot more to protect the residents of President Hotel, who are facing a Nov. 12 deadline for evictions. But when asked about rent control, and he calls any proposals to cap rent increases "dicey." Instead, he prefers requiring landlords to offer renter assistance to all residents facing evictions, regardless of their income levels (the council adopted such a policy in September) and having better communication between landlords and renters.

Renters, he said, need to make sure that they are in a situation in which, if they do get evicted, they're given "some stability from the owner."

Boone said he supports a business tax to fund transportation improvements and expansion of downtown's Transportation Management Association (a nonprofit that offers incentives for employees to switch from cars to transit and other modes of transportation) so that it covers the whole city.

He also wants to see the city beef up its code enforcement to make sure employers don't pack too many employees into their offices, exacerbating the city's traffic and parking problems.

Yet he is also a skeptic when it comes to the city's effort to alleviate parking problems by building two new garages, one in the California Avenue area and one downtown. Responding to a candidate questionnaire by the residents' group Palo Alto Neighborhoods, Boone wrote that he is "not sure we can afford another garage on California Avenue." He is even more skeptical about the downtown parking garage, which the council agreed to build as part of its promise to residents fed up with employees parking on neighborhood streets. Boone told the Weekly that a downtown garage will be "just a Band-Aid."

Boone does not fall neatly into either of the council's two prevailing factions, which revolve around policies having to do with city growth. He supports reducing parking requirements to encourage the building of more housing, especially accessory dwelling units. In the Palo Alto Neighborhoods questionnaire, he wrote that he believes that "most younger renters don't have cars nor do they drive" — a position that appears to align him with the more growth-friendly members of the council.

A native of the Washington, D.C., area who lived in New York City and Los Angeles among other cities before moving to the Bay Area, Boone believes his life as a professional broadcaster has prepared him well for reaching out to people, soliciting feedback and promoting government transparency. At a time when civility on the City Council seems to be in short supply, Boone believes he can help elevate the tone and bring people together. At the Palo Alto Neighborhoods debate on Oct. 4, he said he believe he would bring "energy" to the council.

Boone characterizes himself as "the people's candidate" who is running a "grassroots campaign." He points out that, unlike his four opponents, he has not been raking in campaign contributions. He had raised $660 as of early October, making him a distant fifth in the race for cash (Eric Filseth, who is in fourth place, collected $37,673).

Most people would see Boone's small cash total as a disadvantage. Boone says he doesn't agree. Campaigning, he said, shouldn't be about money: It should be about compassion, about talking to each other, about strengthening the connection between council members and residents. When several current council members proposed during an Oct. 4 debate that the City Council hold more Town Hall meetings in neighborhoods, he argued that such a policy doesn't go far enough. Council members should always be connected to residents, he said.

"We don't need a policy or a procedure or a day on the calendar or anything that says, 'This is the date we have to be together,'" Boone said at the debate.

"We should be knocking on each other's doors, always talking, always involved with each other, always having that dialogue going on. And as a council member that's exactly what I'm going to do."

A Pragmatic Approach to A Trillion Trees
By Sherry Listgarten | 1 comment | 2,207 views

The University of California’s flexible policies during COVID-19
By John Raftrey and Lori McCormick | 6 comments | 1,860 views

Repairing a Disagreement with your Beloved & “Physical” vs. “Social” Distancing
By Chandrama Anderson | 0 comments | 1,197 views