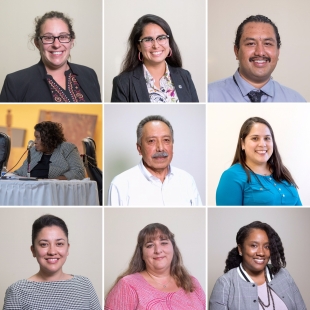 Election Day will be a litmus test for the Ravenswood City School District.

Come Nov. 6, voters will be presented with two distinct narratives from six newcomers and three incumbents running for three open seats on the Board of Education. The newcomers are critical of current school leadership, including the superintendent and school board, for what they describe as failed transparency and communication. They believe the future of the K-8 East Palo Alto school district, which is battling declining enrollment, revenue and the forces of gentrification, depends on fresh governance.

The incumbents, meanwhile, maintain that Ravenswood is on an unprecedented path of progress, largely due to changes put in place by the superintendent they hired five years ago. Examples of this upward trajectory, they say, are the district's new comprehensive middle school, opened last fall to better prepare Ravenswood middle schoolers for high school; targeted investment in science, technology, engineering, math, arts and music (STEAM) education; last summer's formal exit from a yearslong federal special-education mandate, the Ravenswood Self-Improvement Plan (RSIP); and facilities upgrades, supported by voter-approved parcel taxes in recent years. They believe stable leadership and experience on the board are critical to continuing the district's long-needed forward momentum.

The newly constituted board will face a perception of distrust among some in the school community, including with the teachers who signed a vote of no confidence in Superintendent Gloria Hernandez-Goff last year and parents and staff who opposed the renewal of her contract this spring.

The three elected candidates will join board members Marielena Gaona-Mendoza and Sharifa Wilson on the dais.

The Ravenswood school district serves approximately 2,400 students in East Palo Alto and east Menlo Park, about half of whom are English-language learners and the majority of whom qualify for the free/reduced lunch program.

To inform and aid voters in their decision-making, the Palo Alto Weekly recorded video interviews with eight of the nine current candidates in which they discuss their backgrounds and what they see as the most pressing issues facing the school district. The videos, with Spanish subtitles, are posted at paloaltoonline.atavist.com. The ninth candidate, incumbent Charlie Knight, did not return repeated interview requests. (One former candidate, Maria Victoria Chavez, withdrew from the race last week and endorsed candidate Tamara Sobomehin as a "strategy not to split the votes and to ensure that there is a change in leadership at the school district level," she said in a statement.)

I have to say that I am already extremely impressed with Stephanie Fitch. It’s not everyday that School Board candidates go door to door and introduce themselves in their community. She was raised in EPA, lives in EPA, went to PAUSD, has a Stanford education, and has the right balance and experience for what our community needs on its school board.
She strikes me as the kind of candidate that will work to make sure our parcel taxes don’t go to waste and that it gets spent on improving the educational experience in our community. She’s definitely got our votes.

I find the enthusiasm for the first time Ravenswood candidates to be interesting. Most do not regularly, if ever, attend Board meetings. That doesn't show me any interest. One sends her kids to private school. Two grew up here but never attended local schools. So I wonder, where are they getting their information that qualifies them to criticize the Board and Administration? One candidate is very beholding to Facebook. I don't want theZuckerbergs, who oppose public school education, to hold sway over our school board. If these candidates are elected we might see Menlo Park taking more bites out of us. If they are getting their information from Facebook and blogs, we are all in deep Doo Doo.

Can you stay healthy without making more trash?
By Sherry Listgarten | 7 comments | 3,239 views

Think about helping others in our coronavirus-affected area
By Diana Diamond | 7 comments | 2,946 views

The University of California’s flexible policies during COVID-19
By John Raftrey and Lori McCormick | 6 comments | 1,515 views