The man in the middle 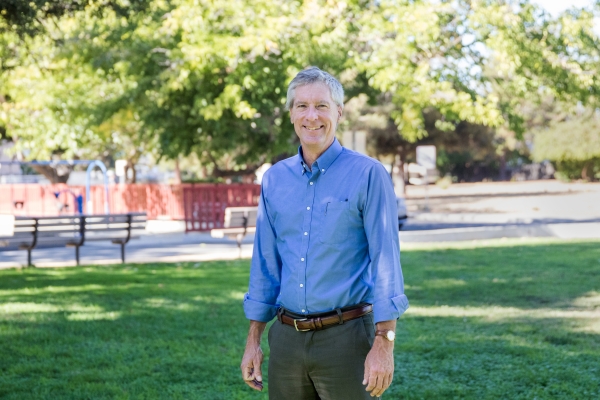 Incumbent council candidate Eric Filseth — standing at Boulware Park, where a parcel of land owned by AT&T can be seen in the background — says he'd like to see the city negotiate with AT&T to purchase the parcel and add it to Boulware. Filseth says the Ventura neighborhood lacks parkland compared to the rest of the city's neighborhoods. Photo by Veronica Weber.

Few at that time could have predicted that this past January, he would be the one nominating Liz Kniss, one of the leaders of the council's pro-growth faction, to the mayor's position or that, minutes later, he would be elevated to the vice mayor's seat by his ideological opponent, Cory Wolbach.

Such is the paradox of Eric Filseth, a fiscal conservative who supported significantly raising housing-impact fees and giving Palo Alto the highest hotel-tax rate in the state; who simultaneously believes in slow-growth policies and more affordable-housing developments; who can raise alarms about the need to address the city's pension crisis and, minutes later, advocate for investing more money in community services.

Today, Filseth is the only candidate who boasts the endorsements of both Greg Scharff and Karen Holman, political rivals who best personify the council's 5-4 split. He has the stamp of approval from Palo Altans for Sensible Zoning, a political action committee that favors slow city growth, as well as from Santa Clara Supervisor Joe Simitian, perhaps the city's most influential and popular Democratic politician.

On core issues relating to growth and traffic, he has generally sided with the four-member minority, which also includes Holman, Tom DuBois and Lydia Kou. This summer he supported the citizen initiative to slash the citywide limit on non-residential development from 1.7 million square feet to 850,000 square feet by 2030; he opposed a move by the council in 2017 to remove the downtown-specific cap on non-residential development from the Comprehensive Plan (the limit of 350,000-square-feet was removed by a 5-4 vote); and he voted against the proposal by the five pro-growth council members to modify the city's annual office cap to allow any unused square footage in the allotment to "roll over" from one year to another.

Yet he also differs significantly from his three allies on the slower-growth side in both substance and style. When it comes to the former, he has proven far less rigid and more willing to compromise with the council's growth-friendly faction.

In February 2017, he joined Adrian Fine, Greg Tanaka, Scharff and Wolbach in voting to approve Elizabeth Wong's four-story, mixed-use development at 429 University Ave., a project that he and others had previously criticized but that he acknowledged followed the zoning laws. He had also joined the more pro-growth side in voting not to include the city's 50-foot height limit for new developments in the Comprehensive Plan.

Filseth also took a more pro-growth stance last October in defeating a proposal from DuBois, Holman and Kou to explore rent stabilization, including possible measures to keep landlords from sharply increasing rents. Rent control, he argued, has a "strong tendency to help a few people right away and hurt a lot more in the long run."

However, on this topic, like some others, he has shown a willingness to compromise. When the item returned to the council this year in a slightly modified memo, he joined his slow-growth colleagues in voting to study the proposal. Even with his vote, the motion faltered by a 4-4 vote.

"I voted against it the first time, but I think if we're going to have a discussion, we've got to have it," Filseth told the Weekly. "People are justifiably worried about even having the discussion because we all know it's in the nature of government that anything that gets started eventually will get to a conclusion."

As such, he is the closest thing that the council has to a Justice Anthony Kennedy, a swing vote whose support everyone covets.

His demeanor, as much as his votes, helps explain his gradual trajectory from a "residentialist" challenger looking to shake-up a pro-growth establishment to the man in the middle of the dais, both physically and ideologically. When others orate, he stays concise; when others complain, he holds his tongue; and when others sling mud at one another, Filseth always somehow comes out clean.

His collegial tone helps explain why all of his colleagues agreed on Jan. 8 to appoint him vice mayor. In nominating Filseth, Wolbach noted that fact he and Filseth often find themselves on opposite sides of the debate — but suggested that this is a good thing.

"I consider the intellectual challenge posed by our disagreements one of my greatest joys of being on this council," Wolbach said. "The ability to spar intellectually with someone who also takes the time to rigorously investigate complex issues that have major ramifications is something I truly appreciate and I respect."

There is, however, one issue that gets the normally subdued Filseth excited: the city's growing pension bill. He has become the council's undisputed leader on the topic of Palo Alto's pension obligations, which are currently estimated at in excess of $300 million. As chairman of the Finance Committee, he has supported the creation of a special irrevocable trust to set aside money for pensions and argued that the city needs to amortize its pension debt. Earlier this year, he also led a move to demand that the city cut $4 million from its structural operating expenses to address its mounting pension obligations. Staff is expected to come back in November with details.

The city's current obligation, he noted, totals about $17 million annually.

"That's $17 million we don't have for police and fire, fixing potholes, trimming trees and all the other stuff we need to do as a city," Filseth told the Weekly. "That number is growing very quickly and it's going to be very difficult to rein it in in the short-term."

Some savings, he acknowledged, would have to come from employees' salaries and benefits, which make up about two-thirds of the city's operating expenses. Filseth supports getting more public input on labor negotiations and was the lead author of a memo submitted in February that aims to inject more transparency into the talks by publicizing every formal offer exchanged between the city and its labor unions. Each offer would be accompanied by a fiscal analysis outlining the effects of the proposed terms on the city's long-term obligations.

"The city is a public agency," Filseth said. "This is a major public concern, and it merits public review and input and transparency."

On those occasions when Filseth does talk extensively, his comments usually pertain to long-term problems such as pensions, growing infrastructure costs and Silicon Valley's economy, which he notes produces jobs five times faster than dwelling units. Big employers, he said, should do more to address the regional housing and traffic problems that they help cause.

"No community can keep up with that without massive external investments," Filseth told the Weekly.

And while he doesn't deny that the council's discussions about issues like growth and rent control often get nasty, he doesn't see that as too much of a problem.

"I care less about the tenor of the discourse than if we make the right decision in the long run," Filseth said. "If we argue a little bit and we come up to a good space, that's more important me than. 'Was everybody really nice to each other?'"

A Pragmatic Approach to A Trillion Trees
By Sherry Listgarten | 1 comment | 2,199 views

The University of California’s flexible policies during COVID-19
By John Raftrey and Lori McCormick | 6 comments | 1,858 views

Repairing a Disagreement with your Beloved & “Physical” vs. “Social” Distancing
By Chandrama Anderson | 0 comments | 1,194 views