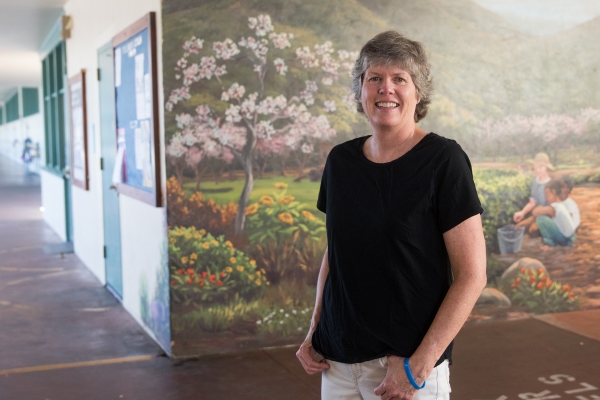 Kathy Jordan, standing outside of Duveneck Elementary School, has spent countless hours at school board meetings criticizing the leadership for its mishandling of sexual-assault cases and other issues. Photo by Veronica Weber. 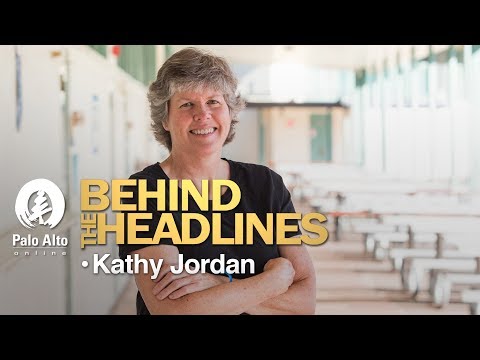 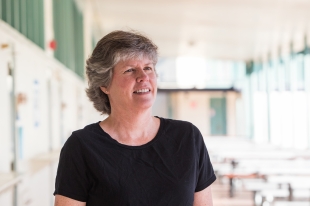 Kathy Jordan, standing outside of Duveneck Elementary School, has spent countless hours at school board meetings criticizing the leadership for its mishandling of sexual-assault cases and other issues. Photo by Veronica Weber.

At a Board of Education meeting in early September, Kathy Jordan took to the speakers' podium to draw parallels between her speaking out against what she sees as wrongdoing in the school district and football player Colin Kaepernick's new Nike ad campaign, whose slogan is "Believe in something, even if it means sacrificing everything."

A similar philosophy, Jordan says, has motivated her own dogged protest of sorts against the district.

She has spoken forcefully at board meetings, publicly calling for the termination of employees who mishandled two sexual-assault reports at Palo Alto High School, the issue that prompted her to get more actively involved in the schools and to run for a seat on the board. She has made close to 100 Public Records Act requests of the district in the pursuit, she says, of greater transparency around employee misconduct. She filed multiple personnel complaints as well as complaints with the California Department of Education and the U.S. Department of Education's Office for Civil Rights related to the two sexual-assault cases.

Jordan describes herself as an independent voice and staunch defender of student rights who will "fight" to put students and accountability first in a way current leadership hasn't.

"What's needed is a will and commitment to this cause, an integrity that looks like it was short on all three from what I see," she told the board in May 2017, in the wake of the public disclosure of an October 2016 on-campus sexual assault at Paly.

Jordan is the mother of two daughters, one a current district student and the older a Paly graduate. An East Coast native, Jordan attended Stanford University in the late 1970s and went on to play tennis professionally, winning seven Grand Slam doubles titles. She also served as a player advocate for the Women's Tennis Association and on the organization's governing body, the Women's Tennis Association Tour.

She also worked in politics in the 1990s. She worked as a field representative and director on U.S. Senator Dianne Feinstein's campaign, was campaign manager for Congresswoman Anna Eshoo for several months and also worked on Lynn Yeakel's Senate campaign in Pennsylvania.

In the school district, Jordan served as co-secretary for Palo Alto Council of PTAs for four years, was a parent network co-chair and volunteered on a district committee that recommended a new school calendar.

After the October 2016 Paly sexual assault incident was reported in local media, she started regularly attending board meetings and sharply criticizing the board's "lack of leadership" in holding employees accountable.

In an endorsement interview with the Weekly, she said she would have done several things differently had she served on the board at the time: She would have pressed to identify the administrators and staff mentioned in two written reports by Cozen O'Connor, the law firm hired to investigate the two Paly sexual assault cases. (The staff names were redacted in the October 2016 incident report but announced verbally at a school board meeting; the names were redacted and have not been released from the November 2015 incident report.)

Jordan believes additional discipline could be warranted for the administrators who remain in the district, including Adam Paulson, who is now Paly's principal, and Kathie Laurence, who is now Gunn High School's principal. She has filed multiple personnel complaints against both Paulson and Laurence, as well as then-principal Kim Diorio and then-superintendent Max McGee, who have since resigned.

"It seems to me that to make change, we need to know who did wrong (and) what went wrong," Jordan said. "If they're held individually accountable ... then I think they're going to change their behavior."

She believes any discipline of public employees who fail to follow law or district policy should be made public, but more routine performance evaluations or complaints about a teacher's classroom ability, for example, do not need to be publicly accessible.

Jordan said she would have also allowed students, parents or others with misconduct allegations to enter them directly into a separate district system, in addition to the current practice of staff entering reports and complaints into a database for tracking reports of discrimination, harassment and bullying.

"Allowing direct entry in this way, from the actual complainant, and tracking it against what is entered by district personnel, would serve as a check and balance on the district, and would provide an avenue for complainants to make sure their complaints would actually be dealt with appropriately," she wrote in an email to the Weekly.

Jordan defends her high volume of Public Records Act requests, arguing that the employee misconduct is to blame. She sees transparency and accountability as key to rebuilding trust among community members who, like her, have lost confidence in district leadership and the school board in recent years.

Jordan sees systemic compliance failures in many areas of district operations, including the budget, special education and instructional minutes at the high schools. If elected, she said, she would advocate for auditing of areas beyond finances.

Her campaign also focuses on academic excellence, "including challenging classes for academically advanced students, electives and extracurriculars," her campaign website states — a position that she said has drawn support from a segment of the Chinese parent community.

When pressed as to why Chinese parents in particular are compelled by her promise to promote academic excellence for all, Jordan said: "Everybody came here, whether it was from China or Pennsylvania like me ... because they wanted their children to get a good education. So of course they're anxious. ... They want to see their child ... be supported well."

Jordan said she believes her public stance on the contentious renaming of two middle schools this spring sparked support from some Chinese parents, who vociferously protested naming one of the schools after Fred Yamamoto, a Japanese-American Paly alumni with the same surname as Isoroku Yamamoto, an unrelated Japanese admiral who planned the attack on Pearl Harbor in 1941. At board meetings, Jordan defended the Chinese community against allegations of discrimination and racism and criticized a process that "seems to have become an exercise in reproach, rather than an exercise in inclusion."

She advocated for a community relations resolution adopted by the school board this summer to also include acknowledgment that members of the Chinese community felt alienated and subject to hostility during the renaming debate.

Jordan also was publicly supportive of reporting weighted grade point averages and said she was in contact with some Chinese parents about that issue.

While Jordan acknowledges that some progress has been made on compliance and transparency in recent years, she believes there's more to be done.

"Many of us in the community have had enough," her candidate statement reads. "We've joined forces — to speak up about the school board and district's dismal record of poor oversight, fiscal mismanagement, and lack of compliance with the law."

• My favorite quote: "Hope has two beautiful daughters. Their names are anger and courage; anger at the way things are, and courage to see that they do not remain the way they are." —Augustine of Hippo

• My proudest moment: Being part of the winning tennis team at Stanford in 1978 — the AIAW national women's tennis collegiate team title.

Can you stay healthy without making more trash?
By Sherry Listgarten | 7 comments | 3,246 views