Fundraising front-runners bring in about $60,000 each 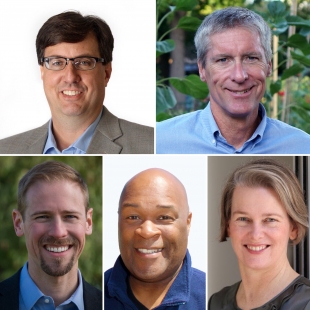 Palo Alto City Council candidates Cory Wolbach, an incumbent, and Alison Cormack are heading into the final month of the campaign season with significant fundraising leads over their three opponents, according to campaign finance documents released Thursday.

The new documents, which include contributions made between July 1 and Sept. 22, show Wolbach in the lead with $63,769 in total contributions so far this year, including $26,301 in the latest reporting period. While Wolbach has pledged not to accept contributions from developers, his list of campaign donors includes a wide range of attorneys, realtors, investors, tech workers and local residents.

His biggest contributor to date is real-estate broker Monique Lombardelli, who in March contributed $2,500 to the campaign. Realtors Zachary Trailer and Leannah Hunt gave him $1,000 and $250, respectively.

Wolbach also is receiving significant support from the tech industry. Michael Angelo, an engineer at Google, contributed $2,000, while Lauren Angelo, an engineer who is currently not employed, gave $2,160. Sam Altman, president of Y Combinator, also gave $1,000 to the Wolbach campaign, while Gary Kremen, founder of Match.com and chair of the Santa Clara County Water District board of directors, contributed $500.

Wolbach's campaign also is getting a boost from other elected officials. The campaign of state Assemblyman Marc Berman, who had previously served with Wolbach on the council, contributed $1,000, including $500 in the latest reporting period. Palo Alto Board of Education member Terry Godfrey and former board president Dana Tom each gave $100, as has state Sen. Jerry Hill, for whom Wolbach has previously worked as a legislative aide. Former Palo Alto mayors Larry Klein ($500), Bern Beecham ($200), Sid Espinosa ($100) and Peter Drekmeier ($100) also are supporting Wolbach's campaign.

Stephen Downing, whose occupation is listed as a "stay at home dad," contributed $2,000.

Cormack, a former Google employee who in 2008 headed Palo Alto's successful $76 million bond campaign to upgrade the library system, also received significant contributions from the tech workers, business executives and local officials. Her campaign raised $24,499 between July 1 and Sept. 22, and $59,798 so far this year, according to the finance documents.

Her largest donors in the latest reporting period include Melody Wu, founder of Melody Academy of Music, Aneel Bhusri, CEO of Workday, and retired developer William Reller, each of whom gave her $1,000. Other donors include former state senator Rebecca Morgan of Los Altos Hills ($1,000), Nana Chancellor, whose occupation is listed as homemaker ($1,000), and local resident Judith Lin Kay ($1,000). Pei Cao, a software engineer at Google, also contributed $1,000.

Of the five candidates, Cormack is the only one who has not pledged to reject donations from developers. Even so, the vast majority of her contributions do not involve donors in development or real estate. A notable exception is Reller, though Cormack said at a candidates forum earlier this week that she has no problem with accepting the contribution.

"I'm personally grateful for Palo Alto Commons and some of the other things he has constructed," Cormack said at the forum, which was sponsored by the Rotary Club.

Trailing Wolbach and Cormack were Councilman Tom DuBois and Vice Mayor Eric Filseth, two incumbents who are being supported by Palo Altans for Sensible Zoning, a political action committee that advocates for slow-growth policies. Both raised just over $37,000, with the vast majority of their cash coming in since July 1.

DuBois' and Filseth's contributors include neighborhood activists, tech professionals and former mayors, who in many cases gave the same amount to each candidate.

Layton, Baker and the Coxes were among the donors who collectively contributed about $100,000 in the 2016 election to support the candidacies of Lydia Kou and Arthur Keller, both of whom had also been endorsed by Palo Altans for Sensible Zoning. Helyn McLean, who also made large contributions in 2016, gave $5,000 to the DuBois campaign this time around, according to the documents.

Joe Hirsch, one of the leaders of Palo Altans for Sensible Zoning, contributed $1,000 to both the DuBois and to Filseth. Technologist Hamilton Hitchings, who worked on a citizens committee to update the city's Comprehensive Plan, gave $450 to each of them.

DuBois and Filseth also received many smaller contributions from neighborhood leaders. Norman Beamer, president of the Crescent Park Residents Association, gave $500 to each of them. Elaine Meyer of University South gave $250 to Filseth and $255 to DuBois. Sheri Furman, a longtime leader of the umbrella group Palo Alto Neighborhoods, gave $250 to the Filseth campaign and $255 to DuBois'.

Pat Boone, a former TV journalist, has raised a total of $660, according to the campaign documents. His two largest contributions came from Bob Stefanski, co-founder of eLab Ventures, and Shailesh Rao, chief operating officer of BrowserStack, Inc., each of whom contributed $250.

At the Monday forum, he contrasted his contributions with those of his opponents in the race and characterized his council bid as a "grassroots campaign." He also said he is not accepting any contributions from developers, political action committees or politicians.

"I'm pretty much like a 'Jimmy Stewart' campaign — like 'Mr. Smith Goes to Washington,'" Boone said at the forum.

The five candidates are racing for the three seats on a council that is set to see a reduction from nine to seven seats. Scharff and Councilwoman Karen Holman are both set to term out at the end of the year.

The Palo Alto Weekly and Palo Alto Online are hosting a candidates forum with all five candidates on Wednesday, Oct. 3 at the Little Theatre at Cubberley Community Center from 7:30-9 p.m.

I think we should all look into Pat Boone more. He is beginning to look like an also ran rather than a real alternative to the status quo. For anyone who dislikes the way City Council has been behaving in the past, it makes sense to look for someone with fresh perspective.

resident3 is a registered user.


"Many contributions from neighborhood leaders" for Dubois and Filseth is a good signal.

The standard to get support from a broad group of people is higher than getting one's close real estate, Google or tech friends.

With Council going to 9, all we need are two winners. Boone could be an interesting third vote just to see how far we can get someone who has raised less money.

To the weekly editors: your colors are showing.

Report Objectionable Content
Email Town Square Moderator
6 people like this
Posted by Wolbach has my support
a resident of Barron Park
on Sep 28, 2018 at 1:55 pm

Report Objectionable Content
Email Town Square Moderator
10 people like this
Posted by Online Name
a resident of Embarcadero Oaks/Leland
on Sep 28, 2018 at 2:11 pm


Report Objectionable Content
Email Town Square Moderator
21 people like this
Posted by Anne
a resident of Midtown
on Sep 28, 2018 at 2:44 pm

So Cormack doesn't mind taking money from developers and wouldn't have voted for the office cap. She is also supported by traditionally pro developer politicians and others. I don't think so, Alison. I'd rather vote for Boone.

Report Objectionable Content
Email Town Square Moderator
8 people like this
Posted by jh
a resident of Evergreen Park
on Sep 28, 2018 at 4:20 pm

jh is a registered user.


What does saying "no" to campaign donations from individual "developers" mean, exactly? There are many other related businesses and professions with financial interests directly tied to commercial growth. Commercial real estate lawyers, commercial real estate professionals, commercial property owners, architects, regional professional organizations, etc. etc., who are in a position to very make generous campaign donations. When a candidate says they won't accept donations from "developers" it's not only not as straightforward as it might first appear, it's also not realistic to ask each donor why they are contributing.

Report Objectionable Content
Email Town Square Moderator
4 people like this
Posted by Don M
a resident of Professorville
on Oct 12, 2018 at 8:21 am

Don M is a registered user.


Rather than money let's look at the people. Cary has long shown his interest and support for the environmental, economic and cultural sustainability of Palo Alto. Allison has proven beyond a doubt her commitment to Palo Alto and to rational and fair decision making. Great candidates!

Fred Balin is a registered user.


IF $$s in local campaigns is an issue for you, take a look at my post of today in regard to the race for Mid-Peninsula Open Space District Ward 5, which includes most of Palo Alto, all of East Palo Alto, and a small part of Menlo Park via this link:
Web Link

Can you stay healthy without making more trash?
By Sherry Listgarten | 7 comments | 3,243 views

Think about helping others in our coronavirus-affected area
By Diana Diamond | 7 comments | 2,948 views

The University of California’s flexible policies during COVID-19
By John Raftrey and Lori McCormick | 6 comments | 1,534 views