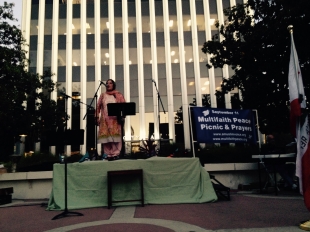 Samina Sundas, founder of the American Muslim Voice Foundation, speaks at the 9/11 Multifaith Peace Picnic and Prayers in King Plaza at Palo Alto City Hall on the evening of Sept. 11, 2018. Photo by Sue Dremann.

Portland's Thai food darling Pok Pok will be popping up on the Peninsula this spring
By Elena Kadvany | 2 comments | 3,423 views

Flying: How to lower your impact
By Sherry Listgarten | 16 comments | 2,814 views

Overachieving in High School: Is It Worth It?
By Jessica Zang | 6 comments | 1,349 views