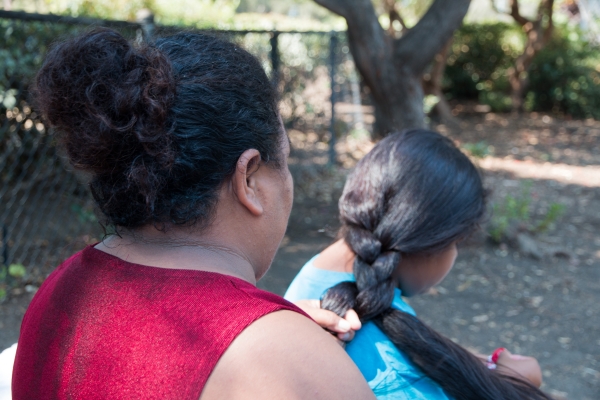 Victoria braids her daughter's hair after taking a shower at Hope's Corner in Mountain View. Photo by Ana Sofia Amieva-Wang. 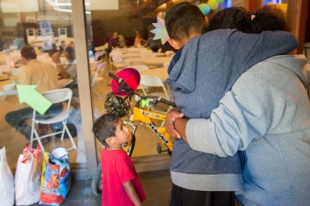 Victoria hugs her 12-year-old son after he was given a bike by a volunteer at Hope's Corner in Mountain View. Photo by Ana Sofia Amieva-Wang.

Mark Noack writes for the Mountain View Voice, the sister publication of PaloAltoOnline.com.

While I have to take a certain responsibility for my transient situation, it is amazing to watch the affluent & semi-affluent walking down University Avenue as if they don't have a care in the world...except to where to eat dinner.

Most tend to look the other way as if trying to avoid a plague...typically caught-up in their own self-serving & self-important universe.

While I don't hate these people, I'm looking forward to the day when/if any of them find themselves in a similar life scenario...chances are, most will whine like babies having to sacrifice their BMWs, $5K/month rental units and/or an $18.00 spinach salad.

Welcome to another world. It's tough out there.


Thank you for this very informative series. Investing in solving homelessness clearly has a strong return in dollar terms, let alone in benefits to the rest of our society.

Report Objectionable Content
Email Town Square Moderator
11 people like this
Posted by Former Homeless
a resident of Charleston Meadows
on Jul 26, 2018 at 3:00 pm

The added expenses and costs of being homeless are often overlooked.

One usually cannot cook or prepare food so it must be purchased processed, packaged or pre-made. Even fast food expenditures and junk food can add-up in addition to being unhealthy from the standpoint of nutrition and dietary guidelines.

There are two types of homeless outside of the usual categories of financially-stricken, the mentally ill and chronic drug/alcohol users.

Those with cars/RVs and those without. The ones with vehicles fare better and at least have a place to sleep and store their few belongings.

It's tough. Try it out sometime and see if you can survive with ease.

Report Objectionable Content
Email Town Square Moderator
5 people like this
Posted by How can we help?
a resident of Duveneck/St. Francis
on Jul 26, 2018 at 5:19 pm

How can we help? is a registered user.


This story makes my heart ache. What are the best local non-profit organizations providing shelter, food and medical services to these children and families?

I currently donate to a few, but it would help to know which ones are doing the best work with the dollars they get.

Report Objectionable Content
Email Town Square Moderator
4 people like this
Posted by Riding a Swing at Peers Park
a resident of Southgate
on Jul 26, 2018 at 6:25 pm

"This story makes my heart ache. What are the best local non-profit organizations providing shelter, food and medical services to these children and families?"

Mine too. Desperate times call for desperate measures & the various sanctioned bureaucracies (i.e. county agencies & non-profits) are often bogged-down with paperwork & inadequate distribution networks. As a result, only a few individuals get the necessary assistance required to survive.

I suggest an all-volunteer agency created and manned by concerned local residents who have the time & caring to make a genuine commitment to alleviate this tragic social condition. Everyone has a skill/gift of their own& perhaps it could become a dynamic model for other communities.

It would take a lot of energy, imagination & networking but the reward would be in helping a fellow man/woman/child who may have fallen on hard times. Churches do their best but it is often not enough in terms of 'reaching out' to those in need.

Instead of de-evolving into an avaricious 'developer's' community, Palo Alto could return to its basic roots where everyone was considered an equal regardless of their socio-economic status or educational level.

That's the PA I remember as a child...

QUOTE: Instead of de-evolving into an avaricious 'developer's' community, Palo Alto could return to its basic roots where everyone was considered an equal regardless of their socio-economic status or educational level.

You're picturing a Palo Alto that vaporized about 40-50 years ago.