Shadows in 'The Valley' 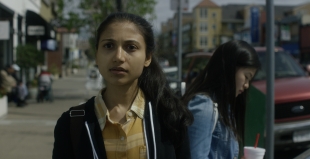 Saila Kariat knows something about high achievers. The Los Altos resident has worked as an electrical engineer (she has a doctorate in the field), a manager at IBM, a marketing director at a startup and the head of a residential construction company. While running a business and raising two daughters, though, she decided to pursue her dream of becoming a filmmaker. Kariat got a degree in film from San Jose State University (she was her class valedictorian). Her debut feature, "The Valley," is getting a theatrical release this month, including screenings at Palo Alto's Aquarius Theater June 11-12.

"I have always loved film and had a desire to work in film most of my life," Kariat told the Weekly in an email interview. "I didn't feel it was a viable option until much later in life, and I felt if I didn't do a film now I would never do it."

"The Valley" tells the story of a wealthy Indian-American family living in Atherton. The successful, picture-perfect Kumars seem to have it all but are devastated by the shocking suicide of college freshman Maya (Agneeta Thacker). Mother Roopa (Suchitra Pillai) tries to bury her grief and feelings of guilt while father Neal (Alyy Khan), a hot-shot tech CEO, sets out on a quest to uncover what led his youngest daughter to take her own life. On his journey, he (and the audience, through flashbacks) learn about Maya's feelings of inadequacy compared to her older sister ("the good daughter"), struggles with her college courses (she feels obligated to major in engineering despite preferring literature, perhaps echoing Kariat's own experience), the family secrets she felt she had to keep, and a heartbreaking sexual encounter. The film highlights the lack of connection and intimacy the Kumars feel, despite all their worldly privilege and success.

"I read a lot of material on mental health and know first hand how it impacts a family. First and foremost, I wanted to tell an honest, compassionate story and not glamorize or sensationalize it," Kariat said.

She lost a brother who suffered from mental illness and it was that tragic event, along with the suicides of several Palo Alto teens in recent years, that inspired her to make "The Valley."

"I also watched my children through their schooling and the intense academic and other pressures they faced. Many of the kids suffer from anxiety, which is born of the culture they are immersed in," she said, referring to both the high-pressure culture of Silicon Valley in general and, specifically, that of Asian-Americans, who she said often are not comfortable discussing mental health. "I know about the stigma, particularly in Asian societies. I think immigrants tend to push their kids harder because many come from difficult circumstances, and they want their kids to live out their dreams. Coming from poorer countries, they may think that money solves everything. ... Another key component is Indian-Americans do not easily talk about mental health" and are more hesitant to seek help, she said.

"The Valley" premiered at last year's Cinequest film festival (held in Redwood City and San Jose) and has since gone on to international acclaim, screening at 25 festivals worldwide, winning 12 awards and being nominated for 19 others. It's now receiving a week of theatrical release in major cities across the United States, including Los Angeles, New York and San Francisco. Kariat, who will attend each screening and offer a Q&A with audiences, said the response from both the film world and her community has been gratifying.

"I was concerned that Indian-Americans would be offended by some portrayals, but quite the contrary," she said. "The response has been overwhelmingly positive."

Sharp-eyed viewers may be able to recognize some familiar places in the film, including DeAnza College, Saratoga's Hakone Gardens and locations in Los Altos Hills, Palo Alto and Half Moon Bay.

Next up, Kariat is collaborating with a friend on a comedy, as well as developing a project about a leading figure in the gun-control movement.

Over her 22 years in the Bay Area and four years in Los Altos, Kariat said she's experienced both the highs and lows of local living.

"I like the spirit of innovation and entrepreneurship, and the feeling that there are endless possibilities. What I don't like is that this spirit sometimes feels hyper-competitive, and there is an increasing obsession with money and status," she said. "There is not much respect if one does not have a high-flying career and focuses on family and friendships."

Info: Go to The Valley.

Can you stay healthy without making more trash?
By Sherry Listgarten | 6 comments | 3,034 views

Think about helping others in our coronavirus-affected area
By Diana Diamond | 7 comments | 2,773 views

The University of California’s flexible policies during COVID-19
By John Raftrey and Lori McCormick | 5 comments | 1,069 views