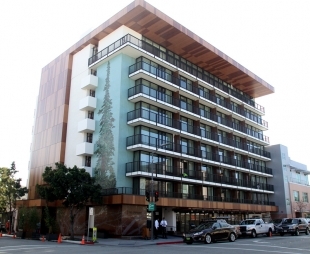 The Palo Alto City Council's Finance Committee recommended placing a measure to raise the city's hotel-tax rate from 14 percent to 16 percent on the November ballot. File photo by Veronica Weber.

Increasing the hotel tax is always popular because out of towners pay for the benefits enjoyed by those living here. As Mr. Tanaka notes, at some point, it does matter that we have the highest hotel tax rate in the area. Mountain View is seeing an explosion in hotel construction and growth.

Palo Alto increasingly makes it more and more difficult for businesses to succeed here. It is unclear how it is necessary to do a poll to make the determination that residents would always much prefer non-residents pay for things. This is so obvious.

In a boom economy perhaps the different in hotel tax rate won't matter. Wait until a down economy - then Council will wonder where all the hotel revenue went. And we can point left and right to Menlo Park / Redwood City and Mountain View.

The city council is too afraid of the tech companies to make them pay for the infrastructure that they use with a common sense tax on employee headcount or square footage. Instead, they indirectly tax the tech companies with a hotel tax that primarily impacts business travelers.

Report Objectionable Content
Email Town Square Moderator
14 people like this
Posted by Resident
a resident of Midtown
on Apr 18, 2018 at 10:55 am

The topic is really upsetting to begin with.

This city has more money than most cities in the world, and still cannot make its budget work. This is clearly a matter of incompetence. If city officials cannot do their jobs with the existing budget, they need to be replaced by someone who can.

The survey results are also interpreted in a misleading way. People are already paying a lot of taxes in Palo Alto, and clearly don't want to pay more. Instead, they vote for having someone else pay the bill for them, probably without carefully considering all the consequences. Putting the burden on hotels or other businesses will only hurt these industries and make them leave the city, leaving us with a smaller budget.

A big shout out for Mr Tanaka, who seems to be the only person looking at this issue with the correct view.

Report Objectionable Content
Email Town Square Moderator
16 people like this
Posted by Online Name
a resident of Embarcadero Oaks/Leland
on Apr 18, 2018 at 11:11 am


Expect even more RV's lining El Camino and elsewhere since many Stanford patients and their families and Stanford construction workers have been priced out of most of the hotels and motels.

How about if PA starts controlling its spending instead of trying to raise taxes and utility rates?

Report Objectionable Content
Email Town Square Moderator
11 people like this
Posted by Novelera
a resident of Midtown
on Apr 18, 2018 at 11:40 am


As usual, Tanaka's comments make no sense. While I am ambivalent about a hotel tax increase, I do resent any additional funds being available to the current city council. They could have offset part of the shortfall by leaving Ross Road alone!

Report Objectionable Content
Email Town Square Moderator
16 people like this
Posted by Bill
a resident of Barron Park
on Apr 18, 2018 at 1:50 pm

I agree with the comments from Mr Tanaka and Ms Kou quoted in the article. Although unpleasant, the City needs to go through the list of projects and re-think what's realistic and possible given the escalating costs. Obviously, the new public safety building is becoming a budget buster. That project has gone from $47 million to $91 million, with another $40 million for the adjacent parking to garage.

There aren't many details in Gennady's story, but I'm guessing that the City would plan another round of Certificates of Participation (COP). Future revenue from the hotel tax would be used to "gladly pay you Tuesday for a Public Safety Building today" and get secured against the City's general fund. That seems like a lot of new debt given the rising pension obligations and City's COPs from the first round of infrastructure financing.

Honestly, I don't think Mr Scharff has his head screwed on right. "I think it's really important that we finish what we said we'd do for the voters" is a joke, right? This voter would be happy if citizens don't get burdened with several hundred million dollars of debt for the next 30 years. But, it's all about Greg Scharff, isn't it? Doesn't he own property next to California Avenue?

Report Objectionable Content
Email Town Square Moderator
8 people like this
Posted by Gale Johnson
a resident of Adobe-Meadow
on Apr 18, 2018 at 2:43 pm


@Resident
Amen...you can see my comments on the PA golf course article elsewhere on PAO. Tanaka is truly looking out for our best financial interests...on all issues. Good for him. He treats it personally, as if it was coming out of his own pocket...like a family budget decision. No other CC member seems to treat it that way. It's free money to spend, not free to taxpayers, however. Keep up that good oversight, Greg.

Report Objectionable Content
Email Town Square Moderator
9 people like this
Posted by Cynthia
a resident of Community Center
on Apr 18, 2018 at 11:54 pm

For goodness sake, TAX THE BUSINESSES DOWNTOWN! Palo Alto is the only city in the Bay Area who isn’t doing this!

Surrounding cities are funding (lots of!) new benefits for their residents through business taxes.

Why are own downtown’s businesses exempt?

Report Objectionable Content
Email Town Square Moderator
12 people like this
Posted by Online Name
a resident of Embarcadero Oaks/Leland
on Apr 19, 2018 at 2:10 am


Yes! Start taxing the businesses and stop the CC from its out-of-control spending. It's becoming almost Kafkaesque as the detailed article about our new $1,300,000 rail consultant highlight,

Mr. Tanaka was the only voice of fiscal sanity questioning the rush by Cory and Fine (the chair and a member of our Rail Committee) to hire the consultant and to try to understand the difference between the new consultant and the 2 others billing $1,100,000 and $400.000.

I guess Cory was more focused on the soda tax than on the rail project on which we now allegedly need to spend a million dollars to play major catch up.


Report Objectionable Content
Email Town Square Moderator
7 people like this
Posted by Randy
a resident of Community Center
on Apr 19, 2018 at 8:58 pm

Report Objectionable Content
Email Town Square Moderator
3 people like this
Posted by Concerned
a resident of Old Palo Alto
on Apr 20, 2018 at 9:03 am

Increasing the hotel tax will force many companies who place their people in Palo Alto for office convenience to require their employees or visitors to travel a bit further and stay in neighboring cities. They are frustrated enough already with the rates that are being charged in the immediate area, an additional 2% to the company who pays for frequent inbound travel will add up and make them reevaluate their hotel choices. Palo Also will ultimately lose more money than they hope to gain with this additional 2% as hotels in the neighboring communities will step up their marketing efforts and use this to their advantage.

Report Objectionable Content
Email Town Square Moderator
4 people like this
Posted by With Apologies ...
a resident of Crescent Park
on Apr 20, 2018 at 7:15 pm

Don't tax you,
Don't tax me,
Tax that fellow at the DoubleTree.