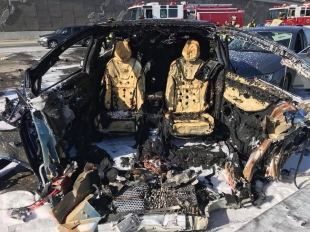 The fatal crash involving a Tesla Model X in Mountain View is the subject of a federal investigation. Image courtesy of the Mountain View Fire Department.

Tesla should be embarrassed at its dis-ingenuousness. Its newsletter Web Link claims "The reason this crash was so severe is that the crash attenuator, a highway safety barrier which is designed to reduce the impact into a concrete lane divider, had either been removed or crushed in a prior accident without being replaced. The following image shows what the barrier looked like when the crash attenuator was in proper condition, and what it looked like the day prior to the crash" Web Link

It is obvious to the most casual observer that the alleged prior-day crash attenuator is totally different from the pictured earlier "proper condition" attenuator. It is definitely not a crushed version of the latter (hint: count the siderails on both).

In any case, Tesla's vehicles should not have to rely on CalTrans' diligence for their safety. It must take responsibility for its products, not try to scapegoat the highway department. Until Tesla can show they got it right, I'm sticking with my EV from an established manufacturer.