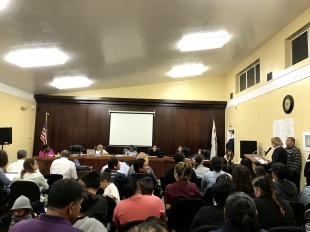 As a parent of a 2-yr old, it concerns me that our school district is a circus. My hope is that this gets resolved real soon.
Mismanagement starts at the top!! The bottom line is, bad managers are bad for business, and they're even worse for their employees.
Superintendent Gloria Hernandez-Goff must go and take her cronies with her. Perhaps this would be a smart first step to stop the bleeding!!!!

Glad to hear that Charlie Knight sat there and kept her mouth shut...wasn't she being investigated by the San Mateo County District Attorney's Office for a possible financial conflict of interest related to the renting of homes she owns to school district employees, during her tenure as superintendent?

I came out to the meeting and some people asked what exactly it is the board members will do, because they showed no interest in keeping the CDC. I thought the CDC parents/staff gave a great presentation of how the students are doing. The video was quite touching, but it clearly didn't get through to the Board. They say someone else will take over, but I believe it is because the district's administrators and Ms. Hernandez have continued to spend money while knowing well they were taking the district down hill. Some people at the meeting asked if the superintendent's contract will be renewed- I for one hope not.

Portland's Thai food darling Pok Pok will be popping up on the Peninsula this spring
By Elena Kadvany | 2 comments | 3,570 views

Flying: How to lower your impact
By Sherry Listgarten | 18 comments | 2,931 views