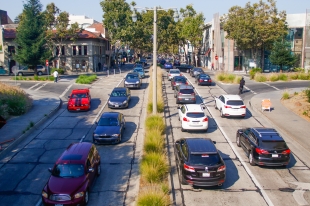 Traffic continues to be an area of dissatisfaction among Palo Alto residents who participated in the city's latest National Citizen Survey. Photo by Veronica Weber.

11 people like this
Posted by Resident
a resident of Another Palo Alto neighborhood
on Jan 31, 2018 at 9:58 am

As someone who responded to the survey, I found that the responses (or questions themselves) were too vague.

Of course someone who doesn't use the shuttle or VTA will say good, because they may see shuttles and buses around town. Ask if they had used the shuttles or buses and why not may have given a different response.


"Similarly, transportation remains a topic of widespread dissatisfaction. In the category "ease of travel by public transportation," only 29 percent gave the city positive responses. In the categories of "ease of public parking" and "traffic flow on major streets," the city received good reviews from 32 percent and 33 percent of the respondents, respectively."

I'm curious about what the figures were for last year and whether a roughly 70% disapproval rate for the above questions will make any difference to the powers that be.

You Can Help: Scents and Migraines
By Chandrama Anderson | 0 comments | 1,196 views