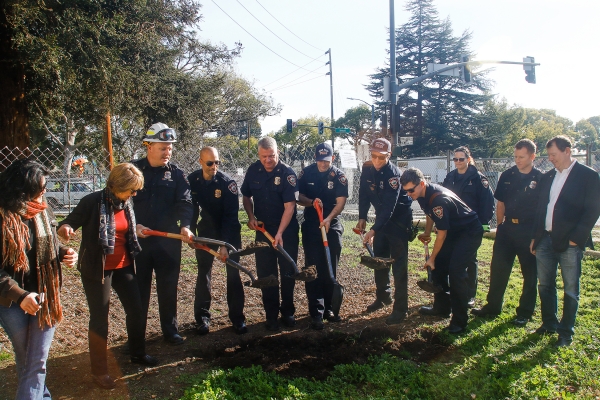 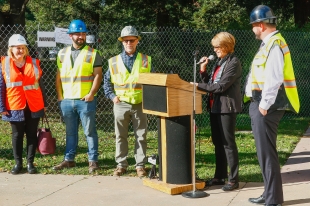 Liz Kniss, mayor of Palo Alto, stands with members of Strawn Construction during a groundbreaking ceremony for the fire department's new fire station at Embarcadero and Newell roads on Jan. 30, 2018. Photo by Veronica Weber.

I remember, as a kid growing up in the neighborhood, taking my bike to that fire station for a license and riding past it on my way to swim at the Rinconada pool. Will miss seeing that good 'ol building but no doubt, it needed updating.

3,454 square feet for a fire station of 23? That is smaller than some houses in Palo Alto.

I suppose South PA will start talking about the upgrade.

Perhaps there will be tours when it's completed. Will be able to take my teens since I never had time for it in the past.

When will we have a fire station closer to the hills?

Report Objectionable Content
Email Town Square Moderator
26 people like this
Posted by Explanation
a resident of Mayfield
on Jan 31, 2018 at 4:19 pm

Closer to the hills? You know that the modern problem with wildfires is that the forest fires are not allowed burn naturally because people are invading the woods with their homes and so now they firefighters need to go in and rescue the homes (and people) that shouldn't have been there in the first place!

There is one in the hills it’s just not open or something. The next closest station uses the fire engine crew to also work an ambulance so hopefully they aren’t needed.

Portland's Thai food darling Pok Pok will be popping up on the Peninsula this spring
By Elena Kadvany | 2 comments | 3,436 views

Flying: How to lower your impact
By Sherry Listgarten | 16 comments | 2,831 views

Overachieving in High School: Is It Worth It?
By Jessica Zang | 6 comments | 1,368 views