As 2017 comes to a close, we recall what Palo Altans said — and why 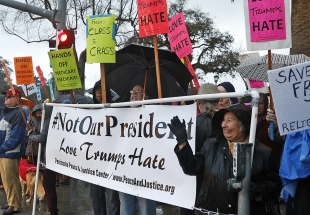 Protesters stand at the corner of El Camino Real and Embarcadero Road during a rally hosted by the Peninsula Peace and Justice Center following the inauguration of President Donald Trump on Jan. 20, 2017. Photo by Veronica Weber.

Portland's Thai food darling Pok Pok will be popping up on the Peninsula this spring
By Elena Kadvany | 2 comments | 3,761 views

Flying: How to lower your impact
By Sherry Listgarten | 19 comments | 3,016 views