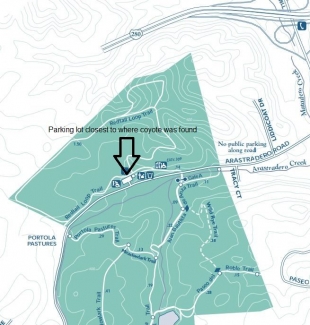 A dead coyote that was partially skinned was discovered near a trail about 50 yards west of the southernmost trail near Arastradero Road and the parking lot indicated above. Image courtesy city of Palo Alto.

Aletheia is a registered user.


Uh, I think it's called "hunting". Although illegal in that area, it's certainly not "animal cruelty".

Sue Dremann is a registered user.


Aletheia -- Police have not released details regarding the manner of the coyote's killing. We don't know that it was hunted. It may be there are circumstances that led animal services and police officers to label the death an act of animal cruelty. I am working to get more information, but relevant staff are out of town for the holidays.

resident17 is a registered user.


Could you please name the trail the remains were near? The description of the location in the article isn't clear.

Report Objectionable Content
Email Town Square Moderator
17 people like this
Posted by Graduation Effect
a resident of another community
on Dec 29, 2017 at 5:11 pm

"The animal was hung upside down from a tree and partially skinned."

The FBI defines cruelty as intentional or reckless actions that mistreats or kills any animal without just cause——e.g., torturing, tormenting, mutilation, maiming, poisoning or abandonment.

The FBI acknowledges there is a link between cruelty to animals and cruelty to humans.

resident17 is a registered user.
Due to violations of our Terms of Use, comments from this poster are only visible to registered users who are logged in. Use the links at the top of the page to Register or Login.

@resident17 - where would you hire a "trapper" that is a member of a satanic cult? By skinning and hanging this animal, was he trying to send a message to other coyotes in the area?


Umm - actually coyote pelts are worth $100 a pelt. It could have been economic. I hope so - but sadly - it is more likely to have been a warped human. I'm glad the city police and animal control are following up to get the real story.

However, it is true that coyotes are becoming a real danger. I have a friend living near Rancho San Antonio, who spotted two large coyotes walking down a residential street near her last week. My friend was getting into her car and it didn't faze them. Her neighbor, about to walk her 3 small dogs, decided not to. This same friend, got a video of a cougar in her (fenced) backyard recently (last couple of months). The video made it on to the evening news. I don't have an answer to the increasing number of wildlife in suburbia. Overpopulation is a big problem for predators in the wild. A good thing is that the cougar(and probably the coyotes as well) population is succeeding in keeping the number of deer down. The bad thing is a given area can only support so many cougars and coyotes. What are we to do about the juveniles being pushed into town because they are being pushed out by existing adults? Remember the one that was treed in Palo Alto a few years ago, 3 blocks from an elementary school on the east side of El Camino. I have no answer but I don't think doing nothing is the answer either. I hope the various animal control officers in San Mateo and Santa Clara County come up with a policy.