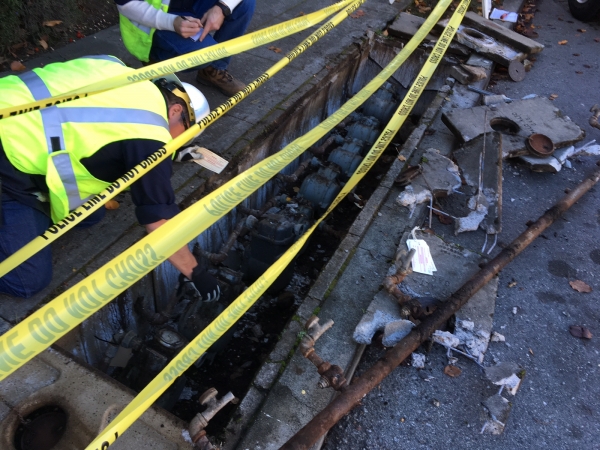 Underground gas lines and meters were damaged by a truck parked over concrete lids protecting utilities equipment on Kipling Street near Everett Avenue on Dec. 28, 2017. Photo by Veronica Weber. 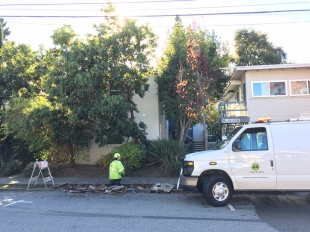 A gas leak in the 300 block of Kipling Street in Palo Alto disrupts gas service for eight homes on Dec. 28, 2017. Photo by Veronica Weber.

A moving truck that was parked on a downtown Palo Alto block Thursday afternoon damaged a row of concrete boxes that protected utilities equipment, causing a gas leak, a Utilities Department spokeswoman said.

Around 1 p.m., crews responded to a reported gas-line break at Everett Avenue and Kipling Street near Johnson Park, according to police scanner activity. The gas leak disrupted service for residents at eight apartment units, according to utilities.

The truck was parked on a sidewalk, where the weight of the vehicle sank into eight concrete boxes protecting gas meters and broke a manifold that helps provide gas service to a neighboring apartment building in the 300 block of Kipling Street, Utilities spokeswoman Catherine Elvert said.

An eyewitness had told a police dispatcher that some people exited the moving truck, pushed the vehicle out of the caved-in area and drove away, according to Elvert.

There was a "big hole in the ground," according to police scanner activity. The broken line was making a "whooshing noise."

There were no reports of evacuations in the area, Elvert said.

"This is essentially like a hit-and-run," Elvert said. "The folks in the moving truck are lucky. I can't believe they made it out in the first place."

Utilities crews were able to stop the leak soon after they arrived to the scene, she said.

The manifold will have to be rebuilt and connected to the meters, she said. Plumbers will also need to check the service line, which was likely bent.

The landlord of the affected apartment building plans to call a private plumber to fix the service line, Elvert said. He didn't have anyone in the building moving into any of the eight units on Thursday.

On Friday afternoon Elvert said gas service was not yet restored.

"Some work still needs to be done on the private property side. It sounds like there was damage to the private service lines that needs to be repaired before we can turn the gas service back on. This is important for safety reasons. Homes need to be pressure checked for gas leaks to ensure that no gas enters the building and potentially causes an explosion," she said in an email.

City utilities field-service techs are working with the plumber and landlord at the property to get the repairs done as quickly as possible. The department is ready to turn on gas service as soon as the work is done.

"Hopefully this should happen before the end of the day. We have our folks here all weekend on call in the event any emergency or urgent work need arises, she said.

The crash resulted in a low pressure leak and no injuries, according to the Fire Department.

Police units also have responded to the scene to block off traffic surrounding the leak, according to scanner activity.

Officers were on scene for about 45 minutes blocking streets in the area, which have since reopened as of 3 p.m., police Sgt. Brian Philip said.

Philip confirmed police are investigating the incident as a hit-and-run and are looking for the truck and its occupants.

This story will be updated as more information becomes available.