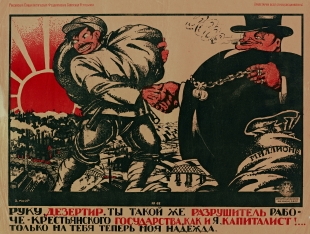 Dmitrii Stakhievich Moor's poster, "Deserter — I Extend My Hand to You. You are as Much a Destroyer of the Workers-Peasant State as I, a Capitalist! Now Only You are My Hope," is on display at the Cantor Arts Center through March 4, 2018, as part of an exhibit on the 1917 Russian Revolution. Photo courtesy Hoover Institution Library & Archives.