Getting healthy in time for Pac-12 women's hoops season 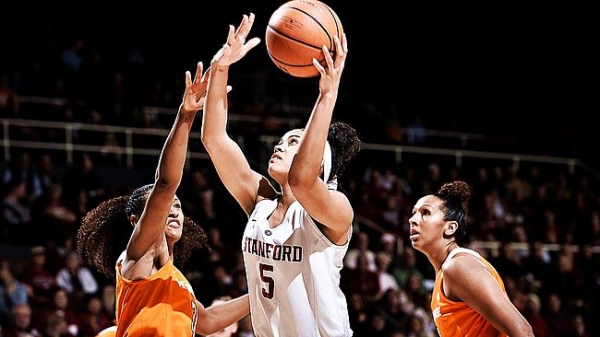 Kaylee Johnson (5) ranks second on the team in rebounds, averaging 7.8 per contest. Photo by John Todd/isiphotos.com. 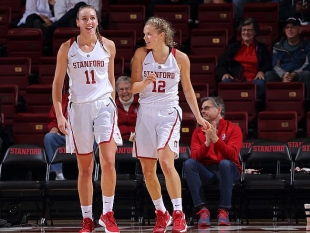 Brittany McPhee returned to the lineup in Stanford's home loss to Tennessee last week and it was immediately apparent how much the Cardinal women's basketball team missed its star senior guard.

Having her in the lineup breathes new life into Stanford's conference hopes as it prepares to open Pac-12 play Friday against visiting No. 11 UCLA at 5:30 p.m. The Bruins are the projected conference champs according to a preseason coaches poll. Stanford was tabbed for a second-place tie with Oregon.

Marta Sniezek/Stanford Athletics
"It was great having Brit back," Stanford coach Tara VanDerveer said. "She made a statement. She set the tone."

Freshman Maya Dodson made her collegiate starting debut and showed she belongs.

Stanford fell out of the AP Top 25 poll for the first time since 2001 this week and that may be a blessing in disguise.

The Cardinal's preseason schedule included five losses to teams ranked ninth in the nation or higher and a sixth to a team with a 10-2 record.

Stanford (6-6) enters conference play with its worst start after 12 games since opening the 1998-99 season 4-8, when it finished 18-12 and got beat in the first round of the NCAA tournament.

"I want us to take this tough schedule and make it pay off," Cardinal coach Tara VanDerveer said. "We have to embrace the challenge. We need more consistent play."

McPhee returned to the Stanford lineup for the first time in over a month. She was limited to about 25 minutes and still managed to score 26 points, one off her career best in scoring.

The Pac-12 is loaded with nationally-ranked, quality teams with postseason dreams of their own. With McPhee back and Dijonai Carrington not far behind, the Cardinal can begin working to regain its groove.

Junior Alanna Smith may be the main beneficiary of McPhee's return. The team leader in rebounds (8.4) will not have to carry a heavier load and will be freed up to play a style more conducive to her talents, which means more perimeter movement. Get her going and she'll be a consistent contributor.

Smith has four double-doubles in her last seven games and is at her best when she's attacking. Smith leads Stanford with her .504 shooting percentage and gets to the foul line more than any other Cardinal. If she improves her free throw percentage (.583), Smith, who also has 25 blocked shots, can be dominating.

Senior Kaylee Johnson ranks second on the team with 7.8 rebounds a game and is a steadying influence.

Carrington was playing like a superstar when she was injured. The sophomore has displayed a multilayer game so far, averaging 11.7 points, 7.7 rebounds and 2.2 assists.

Marta Sniezek averages a team-best 4.8 assists per game and has an assist-to-turnover ratio of 1.8-1. Her 12 steals are also a team high.

Kiana Williams reached double figures in scoring in four straight until being held scoreless by the Lady Vols. She still has 61 points over her past four games after scoring 22 in her first seven.

Alexa Romano, Dodson, Anna Wilson, Nadia Fingall and Shannon Coffee have all produced double-digit scoring games for the Cardinal and with more experience can only get better.

Stanford will have a much better conference season than preseason and by the time the conference tournament rolls around, will be back in the conversation.

These local restaurants are donating meals to Bay Area residents in need. Here's how to help.
By Elena Kadvany | 6 comments | 11,102 views

Coronavirus: Plan ahead now for a big outbreak
By Diana Diamond | 19 comments | 4,122 views

Will the Coronavirus Save Lives?
By Sherry Listgarten | 29 comments | 3,888 views

The first few seconds after awakening; before I remember the virus
By Chandrama Anderson | 0 comments | 972 views