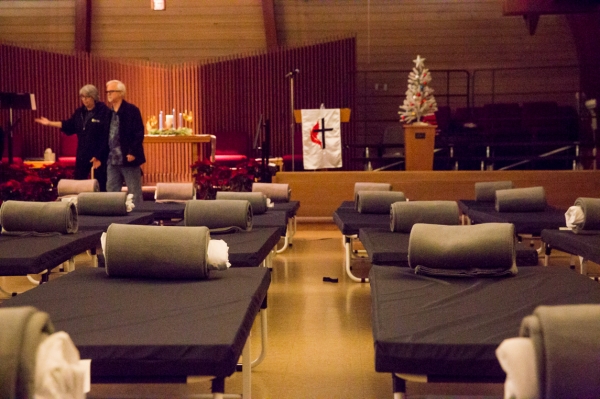 A Cold Weather Shelter opened at Trinity United Methodist Church on Dec. 23, 2017. These beds are reserved and will be filled by referrals. Photo by Natalia Nazarova. 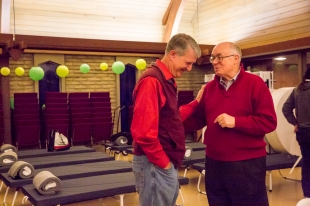 
Kudos and thanks go out to our neighbor and sister church in Mt. View, Trinity UMC, and pastor Michael Love. I'm a member of Wesley United Methodist Church here in PA. Thanks also to Supervisor Joe Simitian and coordinator Robert Dolci for the work they've done to bring this to fruition. And one more...thanks to the community of residents who live near Trinity for accepting this humanitarian focused program. And it's a program that serves probably the most vulnerable homeless people in our community.

From the pictures, it looks like a very nice and safe setting, and the beds look nice, not air mattresses on the floor.

But, I always have questions. I always do, and anybody that knows me knows that. I am curious how the Community Services Agency screens people to determine who are most in need of being referred? Also, the funding? The article didn't say anything about that. I assume the church gets some financial support for utilities, etc., and the meals and beds are a cost factor also. City, county, private donors, companies? I would be curious but won't ask, the cost per bed.

Wesley UMC participates in our local program for the homeless, called Hotel de Zink. We host 15-20 screened people for the month of February. We provide an evening meal, prepared by members of our own congregation, and also house them overnight, not in our sanctuary, but in Byrd Hall, our big hall across the courtyard from our sanctuary. It's just a little bit of support, but I know from experience, and having prepared meals for them, they are very appreciative of what we do, and many of them are willing to share stories about their life's struggles with us. Oh, but for the grace of God....