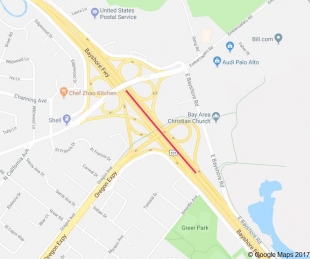 Northbound U.S. Highway 101 lanes were blocked for several hours due to a big-rig crash that resulted in an oil leak during the early-morning hours of Dec. 21, 2017. Image courtesy Google Maps.

What caused the crash?

I wondered what caused large boom I heard last night, woke me up and then I heard the sirens. Perhaps driver fell asleep?

Any detailed info on what happened? I also heard a big bang yesterday right before I went to bed. Good thing there are no reported casualties.