Tara: We're not going to beat anybody playing like this | News | Palo Alto Online |

Tara: We're not going to beat anybody playing like this 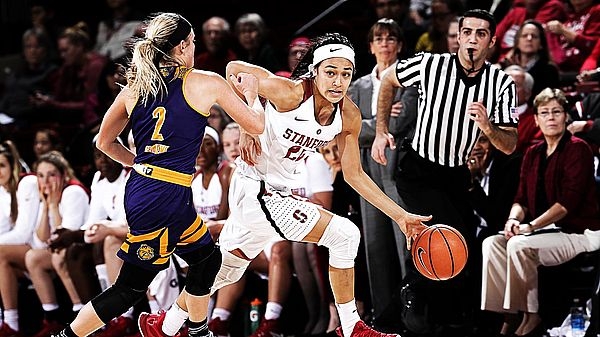 The Stanford women's basketball team held visiting Western Illinois to a single free throw the first 9:56 of the second quarter Monday night, turning a seven-point deficit into a double-figure advantage.

The Leathernecks were undeterred, rallying to take their final lead with just over seven minutes left en route to a 71-64 nonconference victory.

Alanna Smith had 18 points and 15 rebounds and Williams scored 17 points for Stanford. Kaylee Johnson grabbed 18 rebounds for the Cardinal, which outrebounded Western Illinois, 57-46, including 24-14 on the offensive glass.

The Leathernecks (10-2), who earned their first win over a ranked team, outscored Stanford, 23-8, in points off turnovers. The Cardinal shot 42 percent from the foul line.

Stanford was looking for something else heading into Thursday's 6 p.m. showdown with visiting No. 7 Tennessee on Thursday.

"I'm really disappointed," Cardinal coach Tara VanDerveer said. "I think we let up at the beginning of the second half. They were more aggressive than we were. Overall, just disappointing not being able to hit free throws and not being able to finish at the rim."

Instead the Cardinal will have a couple of days to regroup and prepare for the undefeated Lady Vols (11-0), who rank fifth in scoring offense (88.8) and eighth in scoring margin (27.7).

"This is not the way you want to go into the Tennessee game," VanDerveer said. "They were more physical and they were scrappy. We didn't get the job done at every single level. We didn't give ourselves a chance."

Stanford has already squared off with the most potent offenses in the country in No. 1 Baylor, No. 2 Ohio State, No. 7 Connecticut and No. 12 Western Illinois. At least the Cardinal held the Leathernecks 15 points under their average.

"Tennessee is a whole different team coming in," VanDerveer said. "We need to play better. We're not going to beat anybody playing like this."

The Lady Vols have outrebounded their opponent in every game, including a 62-30 edge in a lop-sided victory at Long Beach State. They've also scored 90 points in three of their last four games.

Stanford owns a five-game home winning streak against Tennessee, a streak that appears to be in jeopardy.

"It's the whole team, you can't zero in on one player, you have to take them as a whole," Tennessee coach Holly Warlick said about Stanford. "They're very disciplined so we have to be disciplined as well. It will be a tough game for us. We understand the magnitude of this game."

"It's definitely a tough environment to go into," Lady Vol Mercedes Russell said. "We just have to continue to build and come in with a structured mindset."

The first few seconds after awakening; before I remember the virus
By Chandrama Anderson | 0 comments | 3,584 views

Can you stay healthy without making more trash?
By Sherry Listgarten | 6 comments | 2,982 views

Think about helping others in our coronavirus-affected area
By Diana Diamond | 7 comments | 2,715 views