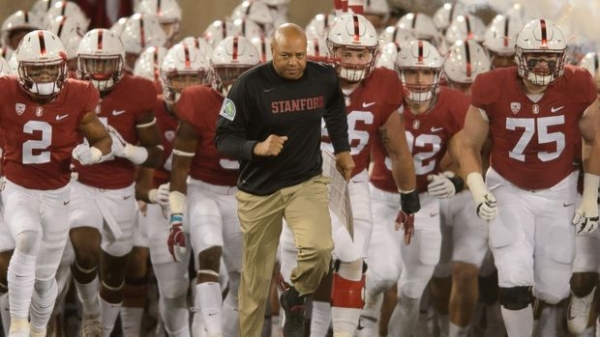 Stanford football coach David Shaw is among seven finalists for the Bobby Dodd Trophy it was announced Friday.

A panel of previous winners, national media, a member of the Dodd family and a College Football Hall of Fame member selected the finalists.

The winner will be selected by the Bobby Dodd Coach of the Year Foundation, and will be announced in Atlanta during Chick-fil-A Peach Bowl week.

The Dodd Trophy was established in 1976 to honor the FBS head coach whose program represents the highest ideals on and off the field.

The award honors the coach of a team that enjoys a successful football season, while also stressing the importance of academic excellence and character, as did Dodd's teams during his 22 years as head coach at Georgia Tech.

After opening the season 1-2, Stanford won eight of its final nine regular-season games, including victories over No. 9 Washington and No. 8 Notre Dame over the final three weeks of the season.

Stanford clinched the Pac-12 North Division and made its fourth Pac-12 Championship Game appearance under Shaw.

Stanford has posted eight or more wins in nine consecutive seasons. The Cardinal plays TCU in the Valero Alamo Bowl on Dec. 28. ESPN will televise the game, which has a scheduled kickoff time of 6 p.m.

Coronavirus: Plan ahead now for a big outbreak
By Diana Diamond | 19 comments | 4,099 views

Will the Coronavirus Save Lives?
By Sherry Listgarten | 29 comments | 3,865 views