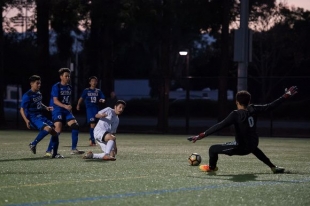 Angel Antunez scores the tying goal in a 1-1 match against Serra on Thursday night. Photo by Karen Ambrose Hickey.

After 77 or so minutes of play, neither Palo Alto nor Serra had been able to put the soccer ball into the net. In the space of 90 seconds, that all changed.

The Padres were awarded a penalty kick as time was running out and converted. The Vikings scored on their next possession. The nonleague game ended in a 1-1 tie.

Palo Alto's Xander Sherer played a ball down the sideline and then sent a centering pass that found Marcus Ama, who headed the ball forward to Angel Antunez.

Antunez beat three Serra defenders to the ball and with a sliding right-footed kick, managed to punch the ball past the goalkeeper along the ground and into the net for the equalizer.

Diana Morales scored both goals for the Bears (5-2, 3-0) and Yara Gomez Zavala recorded both assists.

Menlo-Atherton meets Salinas at 12:15 p.m. at the Fremont Tournament.

In boys basketball, Gunn (3-4) advanced to the championship game of the Prospect Tournament and will play Piedmont Hills for the title at 8 p.m. Friday.

Junior Ellie Jefferies did a little bit of everything with four rebounds, five assists and four steals.

The Vikings (3-2) have won three straight after dropping their first two. They play Willow Glen (5-2) at 11 a.m. Saturday at Evergeen Valley.

These local restaurants are donating meals to Bay Area residents in need. Here's how to help.
By Elena Kadvany | 6 comments | 11,062 views

Coronavirus: Plan ahead now for a big outbreak
By Diana Diamond | 18 comments | 4,078 views