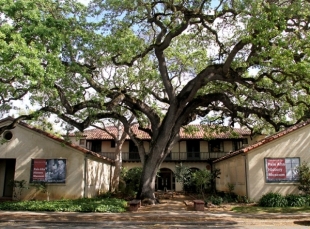 The Palo Alto History Museum was given a one-year extension on its lease at the historic Roth Building under the condition that it raise $1.75 million for a new museum once the contract expires. Weekly file photo.

"...the city will discuss leasing the building to another organization, ..."

Right--to any one of the dozens of other organizations now clamoring to lease the building, waving $10 million in their fists for the building upgrades.

I'm calling the bluff: Fix it and lease it, city hall.

31 people like this
Posted by Disingenuous councilmembers
a resident of Crescent Park
on Dec 12, 2017 at 11:33 pm

"...the city will discuss leasing the building to another organization, ..."

So that Scharff and Kniss can keep the option open for their developer and real estate buddies. Can't let anything go through the Council that doesn't have some benefit for their money interests.

In a town where houses sell every day for 3, 4,and 5 million dollars, raising $1.75 M would take Kniss or Scharff 5 minutes on the phone with their Billion dollar friends. IF they wanted to.
Clearly they'd rather hand out business deals and just pretend they want to save the Museum.

Report Objectionable Content
Email Town Square Moderator
8 people like this
Posted by skeptical
a resident of Barron Park
on Dec 13, 2017 at 8:27 am

This is too generous. If someone can't meet phase 1 goals after so much time, what faith can anyone have they'll meet any further goals?

They should be looking at other options now, not waiting a year for them to make a deadline by the skin of their teeth. The city will find itself stuck in a similar morass with no end in sight.

Report Objectionable Content
Email Town Square Moderator
7 people like this
Posted by We don't need this museum
a resident of Duveneck/St. Francis
on Dec 13, 2017 at 11:53 am

We don't need this museum is a registered user.


The space and $$ could be put to much better use - a place for teens to hang out, housing, non-profit office space, etc.

Report Objectionable Content
Email Town Square Moderator
15 people like this
Posted by Sad
a resident of Barron Park
on Dec 13, 2017 at 2:00 pm

Sad that for a community with so much wealth, most who can care less about preserving the historical part of the town and just wanting to turn everything into office space want to see another historical building go to...oh, office space. At least make it a community space but $1.7 million is pocket change to Palo Alto.

Report Objectionable Content
Email Town Square Moderator
19 people like this
Posted by museum supporter
a resident of University South
on Dec 13, 2017 at 3:32 pm

Palo Alto has a multi-faceted and important history and it deserves a museum that will explore that history, and pass it on to generations to come. The historic clinic building is put to appropriate use in housing a history museum. The City Council, which owns the building, should consider itself responsible for making sure that it does not deteriorate further while the museum organizers continue their work. Also, as the representative body for city residents, the City Council could take more leadership in supporting this effort, given that museums, like libraries and parks, are intended for all the residents to use and enjoy. This article points out that the museum intends to make itself interactive and appealing -- surely it could include spaces that would be welcoming to teenagers or community groups, as readers suggest. Aside from the millionaires and billionaires who might step up to solve this problem in one fell swoop, another calculation shows that an average donation of $40 from each Palo Alto resident would also do the trick. Come on, Palo Alto!

Report Objectionable Content
Email Town Square Moderator
3 people like this
Posted by Annette
a resident of College Terrace
on Dec 13, 2017 at 5:04 pm


How about using GoFundMe to raise some of the money?

Report Objectionable Content
Email Town Square Moderator
6 people like this
Posted by rita vrhel
a resident of Crescent Park
on Dec 13, 2017 at 7:57 pm

Wow! with all respect to the author of this article, it seems very slanted towards the negative.

I attended ti late meeting; rescheduled several times perhaps to discourage attendance, and a large crowd was present to support the History Museum. There seemed to be confusion as to the actual dates fundraising has actually occurred. Finally it was settled at 10 years, not the 17 originally stated by a CC member.

But life and politics are not fair. I urge everyone to contribute what they can so the History Museum becomes a reality and success. In an area that seems to destroy more and more of it's beautiful buildings and heritage, a History Museum is overdue. Thak you.

Report Objectionable Content
Email Town Square Moderator
2 people like this
Posted by Novelera
a resident of Midtown
on Dec 13, 2017 at 7:58 pm


@skeptical "Looking at other options..." Like renting it out as a commercial building, leading to more traffic and higher housing costs as people who work in Palo Alto in high paying jobs want to rent in Palo Alto. Great idea, skeptical.

....let's hold the gun the to the heads of an organization that is working hard to make Palo Alto a more interesting place, with accessible activities.

What the? Rather, let's thank them, and fix the darn place...