Technically brilliant, 'Around the World in 80 Days' proves problematic 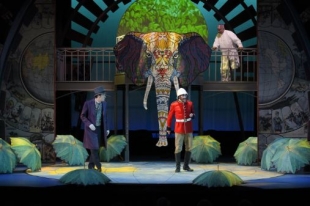 The reviewer's preoccupation with this classic, rather tongue-in-cheek story's 1870s notions reminds me of reactions to, for instance, the Americana classic "Huckleberry Finn" by modern readers who get stuck on the story's 1850s language and sensibilities, who then fixate on those features, and even call for suppressing the book, rather than understanding it as portraying a different era, which its author experienced -- and moreover, keeping alive a window into that era, and implicitly aiding awareness of the broader historical phenomenon of evolving social assumptions. It'd be fascinating to see which widely unquestioned 2017 US attitudes (possibly including some of the reviewer's here?) are disdained and stigmatized in say 2130, along with calls (in the name of the public good) to suppress 2017 literature that still reprehensibly exhibits the attitudes of its day.

Incidentally the burning of books (whatever horrific things it leads to) has invariably begun with cries of righteous indignation.

I agree with Common Sense and feel bad for reader and production to be side-swiped by such a malignant review and headline caption. If we are to read reviews let us know the predilections, bio, and age of critic.

Too bad. From review I will be sure to attend what sounds like a wonderful production.

I could not agree LESS with the reviewer, though for other reasons than “Common Sense” suggests. I saw the show opening night, last Saturday.

I am not sure what passed for “racist” in the reviewer’s mind. Sure, there were stereotypes, but none more so than those involving the white British bumblers, including Phileas Fogg himself. In my opinion, there was less stereotyping and guffawing over the bad jokes than one sees on, say, “Saturday Night Live.”

In at least one plot point, the story supported “diversity” more fully than does most contemporary entertainment. At the end, Phileas Fogg has developed a mixed-race or mixed-ethicity relationship with a dark-skinned woman from India, something that was frowned upon, if not illegal, in 1870s England and is rarely discussed in the U.S. (mixed-race President Obama is almost always referred to as “African American,” despite the fact that his mother, who raised him, was white).

I agree with the reviewer that the performances and technical details were excellent. I was disappointed by the play itself, which translated the novel into a Marx Brothers-type of slapstick comedy. If you like that type of physical and verbal comedy, you will enjoy the show. I laughed only once, when the Indian woman—contrary to expectation—was firing off two six-shooters at those attacking her train and then blowing the smoke off the barrels. (And yes, they were native American Indians she was shooting at, so it really was not “funny” in the context of American history.) For me, the show was entirely predictable, which is not what I normally enjoy at the theater.

All that said, I would still want to see the show. It was interesting, if not entertaining according to my taste.

Report Objectionable Content
Email Town Square Moderator
9 people like this
Posted by Greg David
a resident of Mountain View
on Dec 7, 2017 at 8:39 pm

The reviewer should enjoy the production for its merits of how well it told the story as written by the author and not some politically correct revisionist idea of how it should be told to comply with his self righteous social justice warrior attitudes.

Report Objectionable Content
Email Town Square Moderator
6 people like this
Posted by timetrip
a resident of Mountain View
on Dec 7, 2017 at 9:58 pm

This is the most idiotic review I have ever read. The reviewer, for whatever reason, has made it a soapbox to air personal problems. Plays are plays -- enjoy them or stay home.

Report Objectionable Content
Email Town Square Moderator
11 people like this
Posted by TheatreWorks Fan
a resident of Atherton
on Dec 7, 2017 at 11:03 pm

What a shock to read the review! I found it very difficult to follow her argument because she didn't give any examples of what she found not to her current taste. I wondered as I read the review whether a new generation, is lacking the necessary historical context and only going to the theater to be challenged rather than entertained. This is not the Mime Troupe. Kelly (Artistic Director, TheatreWorks)mentioned in the discussion that there are many theater companies in the Bay Area. This play was not the reviewer's cup of tea. She can find political shows close at hand. I hope she saw Berkeley Rep's outstanding Octoroon and Roe. Both full of both history and contemporary themes explored seriously this season. Meanwhile, for a roaring good time, see Around the World in 80 Days for terrific acting, staging, and use of theatrical effects.

Report Objectionable Content
Email Town Square Moderator
3 people like this
Posted by Ande Jacobson
a resident of another community
on Dec 9, 2017 at 9:17 am

A review is always a reflection of a particular reviewer's assessment of a production, their opinion if you will. For a different take on this production based more on the merits of the production see:

In this assessment, I viewed the production as a period piece, and as such, it wouldn't have been appropriate to apply today's standards of political correctness, either to the script or to the book on which it was based. One can appreciate the artistry in this production without offense if viewed from that perspective.

Report Objectionable Content
Email Town Square Moderator
3 people like this
Posted by Common sense
a resident of Mountain View
on Dec 9, 2017 at 1:27 pm

20-30 years ago amid discussion of reasons for US schoolchildren's sub-average literacy, a national-magazine article pointed out that US elementary reading texts used deadly boring made-up sentences of zero story appeal, while European counterparts tapped into a rich folkloric heritage of children's tales. Those did spill over into US popular use, but US textbook publishers avoided such engaging children's literature for fear of the inevitable pressure groups making trouble from modern viewpoints (of, for instance, a wolf's treatment in Three Little Pigs, or an unflattering elder-woman character in Haensel and Gretel). Such protestors could be expected to complain self-righteously about crude stereotypes, ethnic fetishization, "otherness," etc. So the kids ended up bored and illiterate instead.

Any drama critics lacking enough experience or professional maturity to assess older eras' material on grounds beyond instinctive personal reaction from a modern perspective might do well to also avoid reading Dickens, Kipling, Jane Austen, Mark Twain (mentioned earlier), Victor Hugo -- to say nothing of Lewis Carroll, Mary Shelley, Melville, De Maupassant, Cervantes, the Oz books, Shakespeare, The Arabian Nights, etc., -- all sources that reveal, or even sometimes embrace, injustices concerning race, sex, social class, religion, economic status, or nationality -- these being features of imperfect societies (and all societies to date having been imperfect). It'd be safer to read nothing at all.

Report Objectionable Content
Email Town Square Moderator
2 people like this
Posted by john_alderman
a resident of Crescent Park
on Dec 9, 2017 at 1:44 pm


@Common Sense - You have to understand the POV of the reviewer: group think, closed minded (ironically), SF kind of POV.

"I am a drag queen trapped in a cis-woman’s body, a performing woman who is performing woman.
I am a storyteller of the bawdy/body,
using burlesque, pole dance, and drag as a lens for examining the
ways in which we all perform our gender identities.
I study the ways in which marketing, psychology, and behavioral
economics influence our gendered performances,
and I show people that our performances can be joyful — if only you
learn how to break the fourth wall and enjoy the show. "

After reading this review, I was the tiniest bit trepidatious taking my 9-year old to see this show tonight, but I needn't have been. There's nothing remotely "racist" here, and I agree with the comments made so far pointing out that this review is wrong on at least two counts: what a review is supposed to be/offer its readers, and what constitutes racism/offensive stereotyping versus straightforward storytelling that involves a diversity of lands. To draw a contemporary parallel: is it "racist" to believe that refugees fleeing the Islamic state or other horrific conditions in the non-Western world should be saved and can feel grateful for being accepted into another culture? Is telling or acting out the story of such an escape with on-point accents true to the way English is actually spoken by such brave, ESL escapees "problematically stereotypical"?

One may quibble that, by comparison to the lively second act, the first was somewhat slow and plodding. But poisoning this review with contrived accusations of cultural conspiracies is downright dishonest. I feel lucky to have TheaterWorks putting on shows like this in my city.

Odd comments by the reviewer. The Wikipedia overview of the British empire, French empire and other EU countries which were busy colonizing the rest of the world, including the continent of Africa (exception Ethiopia) during the time period of this play is telling a story reflective of the world as it was back then. One can look at France and Prussia (Germany) in the 1800's as they jostled each other in wars which caused many to immigrate to America, leading up to WW1 and WW2. Many from France who ended up in San Francisco, my relatives included. Many a story on PBS of when the British Empire ran India; or the story of Vietnam - a colony of France- who decided it was time to separate leading to a major war. All of these entanglements are actual history and reflective of the sensibilities of the people in those time periods as we are now creating the history of who we are today.
So how old is the reviewer? What is the reviewer's educational background relative to world history. At least on PBS we get historic documentaries and current travel shows which reflect the historical background of locations around the world. Trying to pigeon hole today's social predicaments in relation to previous time periods should not limit a person's observance of that that has gone before.