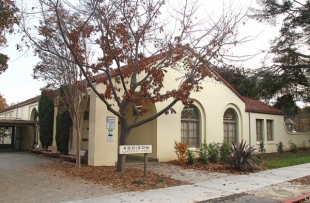 An anonymous donor who has donated funds for Addison Elementary School's renovation plans to pay for the entire project, which could cost up to $17 million. The gift has led to a proposed regulation surrounding the identity of a donor who gives more than $50,000. Photo by Veronica Weber.

That's a pity. This was the previous wording in the proposal that seems sound:

“While PAUSD encourages donors to share their names so they can be publicly recognized, the district realizes some donors prefer to remain anonymous and welcomes and honors these anonymous gifts. If a donor of a gift in excess of $50,000 prefers to remain anonymous, and the gift is made through a donor advised fund, which has a documented process for vetting the source of the donor’s funds, PAUSD will not seek to ascertain the identity of the donor.

If an individual wishes to make an anonymous donation from a personal account, the Superintendent shall identify the donor and alert the Board if a potential conflict of interest exists or there is another reason for potentially declining the gift. This requirement for the Superintendent to identify an anonymous donor may be waived by a vote of the Board in a public meeting.”

Otherwise, the donor will have additional influence over the board, outside of that provided by given donation. That pay-to-play influence would be improper.

Is this not obvious?

Report Objectionable Content
Email Town Square Moderator
15 people like this
Posted by Resident
a resident of Another Palo Alto neighborhood
on Dec 4, 2017 at 9:24 pm

Hmmm, just thinking. Wasn't PIE set up to prevent this.

I have no particular opinion either way myself, but there was so much talk a decade or so ago about some schools getting bigger donations than others, that for the sake of equality PIE was instigated so that no one particular school would have better facilities than any of the others.

What with the new sports center at Paly and the proposed new MP room at Addison the inequalities will again become apparent.

Once again, some policy is invoked and within a few years it is being ignored. Is this really the way to run a school district?

Report Objectionable Content
Email Town Square Moderator
1 person likes this
Posted by Why PiE was founded
a resident of Duveneck/St. Francis
on Dec 5, 2017 at 11:03 am

Why PiE was founded is a registered user.


@Resident - PiE was actually started to eliminate inequities in STAFF between schools and not facilities. Prior to having a Districtwide fundraising organization, some schools had higher staffing levels than others. This was not only inequitable, it also put the District potentially on line for funding staff if the individual school didn't raise enough funds in a particular year. For example, some schools had funding for classroom aides for the full year and some ran out of money in the Spring. Some elementary schools had a dedicated science teacher and some did not.

There will always be some inequalities in school facilities - some elementary schools have larger campuses, brand new MP rooms and flex spaces. Some (Like Hoover) haven't been renovated in decades. Walter Hays will always have better access to the Junior Museum and Zoo, Children's Library and Children's Theater. Hoover, JLS and Fairmeadow have easy access to Mitchell Park, The Magical Bridge Playground and the Mitchell Park Library (all great for free after school "care"). We can use these gifts to fund improvements allowing District $$ to go to other schools.

Report Objectionable Content
Email Town Square Moderator
12 people like this
Posted by JA3+
a resident of Crescent Park
on Dec 5, 2017 at 12:51 pm

To the anonymous donor, thank you very much for your gift to Addison Elementary School! Although our family is outside the Addison attendance boundary, we sincerely appreciate your willingness to give!

Report Objectionable Content
Email Town Square Moderator
5 people like this
Posted by Carl
a resident of Duveneck/St. Francis
on Dec 5, 2017 at 1:08 pm

It's my understanding that the IRS (and California Franchise Tax Board) requires disclosure to a non-profit organization of any gift in cash or kind in excess of $5,000 in their annual Form 990 filing.

It seems strange to me that a public organization (the school district) would not follow the same disclosure guidelines that any non-profit in Palo Alto is required to make under Federal and State law.

So much for government transparency. Either you believe in it or you don't regardless of the consequences (e.g. the donation may not be made).

Report Objectionable Content
Email Town Square Moderator
5 people like this
Posted by Mom
a resident of Palo Alto Hills
on Dec 6, 2017 at 1:44 am

How ridiculous. Why discourage people from donating to our school district? I know someone who is so wealthy that they donated tens of millions to politics. You'd never know she is wealthy by looking at her, and their house is a basic two-story. She doesn't like people to know about their wealth because people get weird when they know. People DO get weird about wealth: jealousy, ingratiating, etc. Leave the donors alone to stay anonymous!

Report Objectionable Content
Email Town Square Moderator
5 people like this
Posted by No Dark Money
a resident of Leland Manor/Garland Drive
on Dec 6, 2017 at 9:51 am

@Mom, since there are strict disclosure laws for most political donations, I'm not sure how your friend would manage to donate anonymously (unless it is so-called 'dark money' groups). Yes, all sort of people would like to be able to donate anonymously - unfortunately, some for the wrong reasons. Public agencies should be transparent and disclose their sources of money.