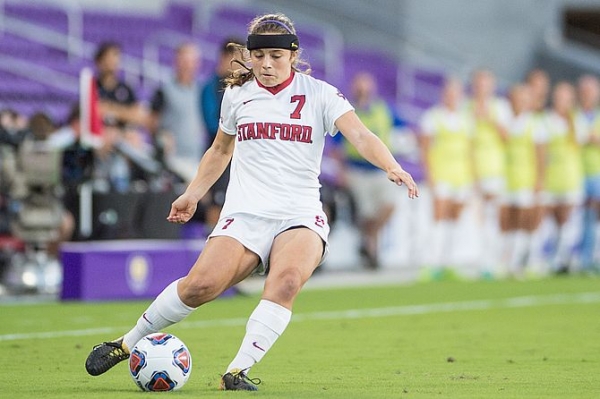 Menlo School grad Jaye Boissiere earned Most Outstanding Player award after scoring the game winner in Stanford's 3-2 victory over UCLA in the NCAA Women's Soccer Championship game Sunday in Orlando. The last time Boissiere was healthy, she was the West Bay Athletic League MVP and led Menlo to its first ever CCS Division III title, in 2012. Photo by Jeremy Reper/isiphotos.com. 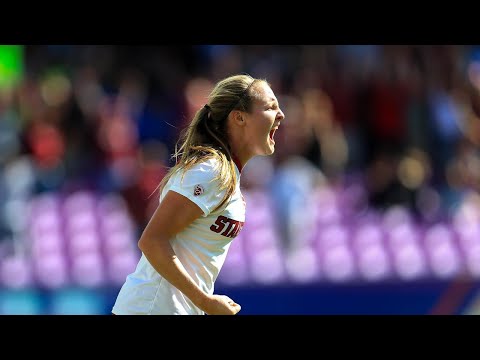 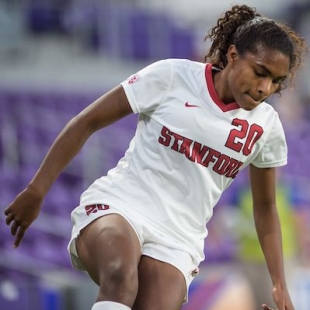 Catarina Macario assisted on all three goals for Stanford at Orlando City Stadium on Sunday. Photo by Jeremy Reper/isiphotos.com.

As it has all year, the top-ranked and top-seeded Cardinal women's soccer shook off a nightmarish scenario and found a way to win to secure its place in school and NCAA history.

Jaye Boissiere/ Stanford Athletics
Boissiere scored in the 67th minute to snap a tie and lift Stanford past Pac-12 rival UCLA, 3-2, in the championship game of the NCAA tournament on Sunday at the Orlando City Stadium in Orlando, Fla.

Stanford (24-1) won its second women's soccer title and the first since 2011. It was also its first trip to the Women's College Cup in three years.

That's about how long it took for Boissiere to fully recover from a series of injuries that left her on the sideline for the majority of the past three years.

Boissiere, embodying the sprit of competition, refused to give in and was ultimately rewarded for her courage, determination and hard work. Boissiere was named the NCAA tournament MVP.

“It’s been a wild journey, but I have had a great support system all around," Boissiere said. "Getting back there and playing has been unimaginable. It was very special.”

A series of injuries kept Boissiere, named the game's Most Outstanding Offensive Player, sidelined for seasons.

The cause was a mystery until she was diagnosed with small intestine bacterial overgrowth, which had led to nutritional deficiencies and susceptibility to injury. This has been her first fully healthy collegiate season.

Her problems actually began at Menlo, where she helped lead the Knights to their first ever CCS Division III title in 2012. She missed most of her final two prep seasons with injuries.

An academic senior, Boissiere still has two years of athletic eligibility remaining. For the moment, nothing else matters but being able to hold a championship trophy that represents endurance and resiliency as much as achieving the apex of college soccer.

Stanford completed a dominant season in which it set school records for goals (91) and tied the mark for shutouts (19). The Cardinal won its final 22 matches, picking up the last two in the same state it suffered its lone loss (3-2 at Florida).

Freshman Catarina Macario assisted on all three goals. The last was her 17th of the season, breaking the school single-season record set by Christen Press in 2009, when many went to Kelley O'Hara.

“Catarina is incredible. She’s a freshman with the maturity of a senior," said 15th-year coach Paul Ratcliffe, who played at UCLA and got his coaching start there. "Every time she gets the ball she looks like she’s capable of creating, if not, scoring a goal. She had remarkable numbers."

Stanford got first-half goals by Kyra Carusa and Andi Sullivan to take a 2-0 lead. But UCLA (19-3-3) countered with two goals within a five-minute span of the second half to pull even.

Eight minutes later, Boissiere struck a 23-yard shot from the top that knuckled inside the left post.

“She’s one of the most inspirational people that I have ever met," Sullivan said. "She never stopped working; she did everything she could do. She never quits. She’s one of the most underrated players in college soccer, so I’m glad she’s getting the attention she should after scoring that goal. She’s been that good all along; she knew that and we knew that. It’s been huge for us all season long.”

Carusa fought for the ball along the end line before floating a pass into the box that Catarina Macario dropped behind to her teammate.

Boissiere settled the ball with her right foot and shot with her left, scoring her ninth goal of the year.

"Hats off to UCLA, they played a fantastic game and really pushed us in the second half," Ratcliffe said. "I was pleased how we responded after they drew level and all the credit has to go to our outstanding players. They put in the work all year and have earned this to the fullest extent."

In the 15th minute, Sullivan sent the ball to Macario on the left side on a buildup that began in the back.

Macario's cross was deflected off the back of a defender, but with Carusa pressuring, UCLA goalkeeper Teagan Micah misjudged the ball, which bounced over her head. Carusa pounced and, with an open net, nailed a half-volley.

Stanford's second goal was the result of an exquisite buildup that began with a Tierna Davidson interception and run upfield, and totaled 15 passes.

Davidson, a Sacred Heart Prep grad, was named the game's Most Defensive Player.

An uncovered Sullivan made a diagonal run from midfield and Macario's ball had just the right pace. Sullivan let it run and first-timed a right-footed shot into the net at 25:03.

UCLA got new life when Stanford goalkeeper Alison Jahansouz fouled a Bruin on a ball that both were trying to reach.

Jahansouz, who had two penalty-kick saves this season, got her hand on Jesse Fleming's shot, but not enough to prevent the Bruins from closing the deficit. It broke a scoreless streak of 487 minutes by the Stanford defense.

Only 4 minutes, 10 seconds later, the match was suddenly even. A UCLA corner kick was flicked to the back post where Delanie Sheehan met it with a point-blank header to tie the score.

"We talked about determination and resiliency, and they fought back," Ratcliffe said. "Jaye scored a fantastic goal. It’s difficult to come back from a situation like this but these girls wouldn’t be denied.”

However, Stanford was undeterred. Boissiere scored and Tegan McGrady nearly got the Cardinal another when a cracker of a shot smashed into the right post.

These local restaurants are donating meals to Bay Area residents in need. Here's how to help.
By Elena Kadvany | 6 comments | 11,090 views