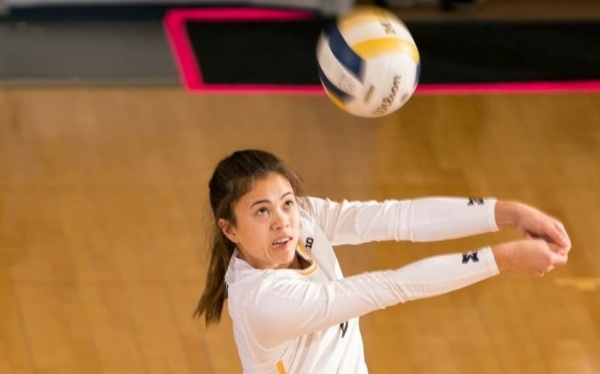 When the University of Michigan women's volleyball team learned its destination for the first round of the NCAA tournament, it was celebration time for one of its players.

"I'm super excited,'' DiSanto said. "It will definitely be nice to come home.''

"I would always go to their games and go to their volleyball camps,'' she said. "It will be cool to play in Maples.''

DiSanto was the star player on the Menlo-Atherton teams that made two consecutive appearances in the state championships. She was a do-everything player for the Bears.

She has had to get used to a different role her freshman year at Michigan. She has played in 16 of 32 matches as a defensive specialist.

"The biggest change was going from being an all-around player to just being in the back row,'' DiSanto said. "The hardest part was getting used to the pace of college volleyball. It's definitely different from the (Peninsula Athletic League).''

Her adaptation to a different environment has gone smoothly. The weather hasn't been as big an adjustment as might be expected. She said it was 58 Tuesday in Ann Arbor, just a few degrees cooler than it was in Palo Alto.

"A couple days it snowed and it gets pretty windy,'' DiSanto said. "When it snows it's fun.''

"I went to the Ohio State and Michigan State games,'' said DiSanto, who is enrolled in the college of engineering and plans on a major in computer science engineering. "It was super fun. That's a way bigger stadium than what I was used to.''

Michigan got off to a 6-9 start in Big Ten play but finished strong, winning five in a row to make the NCAA tournament as an at-large entry. One of the team's top players is junior libero Jenna Leng.

"At some point I would hope Jacqueline competes for that libero role,'' Michigan coach Mark Rosen said. "As a defensive player she's fine, she's real quick and athletic. She's a great kid who brings a lot of good qualities to the program with her volleyball IQ and great attitude.''

Michigan is making its 11th NCAA Tournament appearance in 12 years and its 17th overall.

Stanford, which has appeared in all 37 NCAA tournaments, has played Cal State Bakersfield once before in a first-round match NCAA match, in 2014 when Merete Lutz was a redshirt freshman. It's their only meeting to date.

The Roadrunners won the WAC tournament title for the second time in four years to automatically qualify for the NCAA tournament.

The Cardinal has played 17 matches against the 2017 NCAA field, posting a 14-3 record. Stanford was 13-1 against Pac-12 teams in the tournament, and picked up a non-conference win over Illinois. Stanford's losses came to No. 1 seed Penn State (twice) and No. 8 seed Washington.

Stanford has won more NCAA tournament matches (115), made more Final Four appearances (20) and been in the national championship match (15) more times than any other program in the nation. It's seven NCAA titles also ties Penn State for the most by a Division I team.

These local restaurants are donating meals to Bay Area residents in need. Here's how to help.
By Elena Kadvany | 6 comments | 11,076 views

Coronavirus: Plan ahead now for a big outbreak
By Diana Diamond | 19 comments | 4,090 views