School board to select supe-search firm 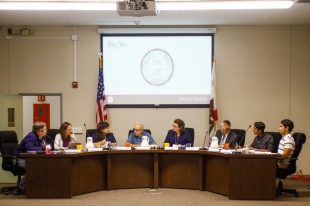 The Palo Alto school board will hold a public meeting Tuesday to hear from four firms looking to help the district select a new superintendent after Max McGee, third from right, resigned in late September. Photo by Veronica Weber.

Why would we ever want to do business with a company that gave us Skelly and McGee?
Why wouldn't we send them to Siberia?

The search firm just serves up the candidate. It's the board that does the picking. Don't blame Bloomingdale's if you don't like the sweater you bought.

@ Parent:
If Bloomingdale's were selling only ugly sweaters, I would go to another store and hope they have a different selection...


"A consultant at Leadership Associates, the firm the district hired to conduct the superintendent search, personally knows McGee and suggested they look at him as a candidate."

After what the public and press have done to former superintendents, why would ANYONE even consider applying for this position - no matter high the salary and extra bonuses?

Just think of how hard it was on the families of these past superintendents.

Why would anyone WANT to relocate their family to an area with ultra mean, hyper critical, overly rich, unappreciative, know-it-all parents who are unforgiving..

I feel that the best superintendents will stay put in their lovely communities, where they are happy.

The smart ones know better.

Report Objectionable Content
Email Town Square Moderator
6 people like this
Posted by Don't Cry for Past Superintendents
a resident of Jordan Middle School
on Nov 28, 2017 at 9:18 pm

Don't Cry for Past Superintendents is a registered user.


@Former Paly Mom - "Why would anyone WANT to relocate their family..."

Because they make a lot of money. They make it even if they are fired. Former Superintendent McGee lived in free housing and had a generous car and phone allowance his entire time in Palo Alto. His car allowance alone was more than many aides in his employ earned. He received a negotiated severance package. Have no worries about his welfare. He already earned a $300k a year pension from his previous employment, and now has another job as Midwest President at Hazard, Young, Attea & Associates conducting Superintendent searches.

He was not run out of town by upset parents (who, among other things, were upset over total lack of progress in minority and disabled performance despite massive financial spending, bullying of the disabled so they could not attend school, and what is termed sexual abuse but what many of us would consider rapes of children at school, sometimes by their own teachers).

Instead, he was given multiple warnings by the Board his performance had to change. It didn't. In fact the issues became worse with him making no successful attempt to address them. At the point it was clear he had no control over his staff and PAUSD became a media circus obviously not protecting it's children, the Board ushered him out with a generous severance package.

Why don't they just promote Scott Bowers into the position, which they should have done 10 years ago and saved all the time and money on searches? He's the best person for the job. He knows the district extremely well and is capable of bringing all parties to the table. He has both the educational background as well as the institutional wisdom. PAUSD should promote from within.

Report Objectionable Content
Email Town Square Moderator
2 people like this
Posted by kids
a resident of Fairmeadow
on Nov 29, 2017 at 8:26 am

I think they should let kindergarteners decide and then donate the money they would waste on scholarship funds. Kindergarteners can tell who is good and who is not. Take a chance. Candidates can not bribe with treats though or extra recess, Kinders like to network too and will take bribes an favors.