ESPNW honors Stanford's Macario as Player of the Year 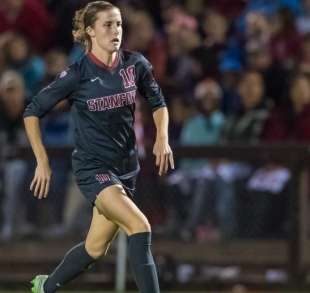 Sacred Heart Prep grad Tierna Davidson is among the semifinalists for the Hermann Trophy. Photo courtesy of Stanford Athletics.

Stanford freshman attacker Catarina Macario was named ESPNW Women's Soccer Player of the Year, as announced Tuesday by the organization.

"What separates her is her technical ability but also her brain for the game," said 15th-year coach Paul Ratcliffe, who has coached five National Players of the Year. "She's a very intelligent player, and then she's a good athlete as well. The amount of goals she has scored is difficult to do for a senior, let alone a freshman. That's truly remarkable."

Macario was named Pac-12 Forward of the Year, Freshman of the Year and to the All-Pac-12 first team after leading the league in every offensive category during the regular season.

In postseason play, Macario has three goals and three assists, including a goal and two helpers in Stanford's opening-round win over Utah Valley. In the second minute of Stanford's 4-0 quarterfinal win over Penn State, Macario netted a phenomenal 25-yard free kick, her third such strike of the season.

She scored at least once in each of the Cardinal's first seven games, with assists in each of the last four during that span. Over her last nine games, she has eight goals and six assists, including two spectacular goals against Oregon (Oct. 19) and an equally impressive free kick during a 3-1 win at No. 5 USC (Oct. 29).

Stanford opens the College Cup on Friday when it takes on South Carolina at 2 p.m. on ESPNU.

It is the second season in a row and fifth time in program history Stanford has had multiple players named semifinalists for the Hermann Trophy, annually awarded to the best collegiate soccer player in the country.

It is the third straight year Sullivan has been named a semifinalist and the first for sophomore Davidson and freshman Macario. Last season, Sullivan and senior defender Maddie Bauer were named semifinalists, with Sullivan being named a finalist.

Stanford is one of four schools with multiple names on the list, joining College Cup opponents Duke, South Carolina and UCLA.

The Cardinal is the only program, men or women, with three semifinalists, and the only school with multiple players on both the men's and women's lists – seniors Foster Langsdorf and Tomas Hilliard-Arce were named semifinalist for Stanford's two-time defending national champion men's program.

Davidson, Macario and Sullivan, who are each MAC Hermann Trophy semifinalists, were named to the first team, and Carusa earned a place on the second team.

These local restaurants are donating meals to Bay Area residents in need. Here's how to help.
By Elena Kadvany | 6 comments | 11,069 views

Coronavirus: Plan ahead now for a big outbreak
By Diana Diamond | 18 comments | 4,082 views

Will the Coronavirus Save Lives?
By Sherry Listgarten | 29 comments | 3,854 views