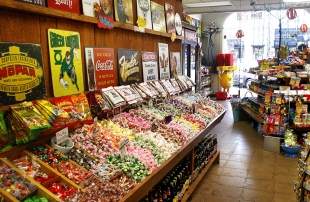 There is a lovely pop up store coming to Town & Country for a short while opening on 30 November which supports a great cause in Kenya, Africa. Web Link I have visited the store when they "popped up" in the area in different locations over the past few years. It will be filled with lovely handcrafted merchandise specially imported as gifts for all ages and perhaps one for yourself.

this place is now way too Beverly Hills and I don't like it.

We stopped shopping in Stanford Mall few years ago. Most of the stores are not for regular people. We go there to look at the dogs if weather is good on weekends.

We shop online or in Hillsdale mall now.

Report Objectionable Content
Email Town Square Moderator
2 people like this
Posted by Judy
a resident of Menlo Park
on Nov 28, 2017 at 11:15 am

I just took a look at the Hermes website. You can buy women's athletic shoes (sneakers) for $1,025 and a bib for your baby for $270 (pray the little darling doesn't spit up his/her food). A great place for people who want to spend money!

Years ago, during my first trip to New York, I visited the Hermes store. I really liked their orange boxes so I purchased the cheapest item I could find (body lotion) and had it wrapped in the orange box. I still have that box and keep some of my treasures in it!

Report Objectionable Content
Email Town Square Moderator
4 people like this
Posted by Haha
a resident of Adobe-Meadow
on Nov 28, 2017 at 2:24 pm

It's a store for bored people, to remind themselves that they have lots of money by spending hilariously large amounts of it on mundane stuff.
Make sure everyone sees the bag at lunch!