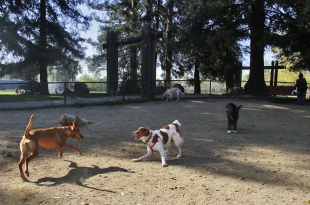 Coco, far left, a Viszla, plays with Curry, center, a Brittany Spaniel and other dogs at the Hoover Park dog run on March 27, 2017. Palo Alto's Parks and Recreation Commission will consider creating an off-leash area for dogs at Peers Park this Tuesday. Photo by Veronica Weber.

20 people like this
Posted by Resident
a resident of Another Palo Alto neighborhood
on Nov 25, 2017 at 9:00 am

I am not a dog owner at present, but have lived with dogs most of my younger life. I would not want to take a dog to the dirt filled parks we have in town. Dogs end up filthy and would need to be bathed before being allowed in the house from the dust in summer and the mud in rainy season.

Can we please have a sensible grassy dog park? It would be nice to have an area where we can actually walk and train a dog to walk to heel also rather than just let them run free.

I do like the dog area in the new San Antonio center - it is about the only thing I do like about the center. If I was a dog owner I am sure I would be going there to exercise my dog knowing that he wouldn't get covered in dust or mud.

Although my dog prefers people to other dogs, I am happy that there will be a dog park with separate spaces for large and small dogs in nearby Peers Park. I concur with Resident that it would be ideal if the dog park is covered with grass, rather than simply dirt.

Report Objectionable Content
Email Town Square Moderator
4 people like this
Posted by Thoughts of secession again
a resident of Another Palo Alto neighborhood
on Nov 25, 2017 at 11:42 am

It is completely inappropriate to slate Juana Briones Park for a dog park. This is more revenge against neighbors on that side of town. The City report stated that side of town should be one area prioritized for acquisition of property for parks and open space because of density and development impacts. The City should buy property and create s dog park which we need, not destroy the only community asset over here at the same time that overdevelopment has robbed our children of benefiting from the majority of community assets on the north side of town because of traffic.

Report Objectionable Content
Email Town Square Moderator
9 people like this
Posted by Thoughts of secession again
a resident of Another Palo Alto neighborhood
on Nov 25, 2017 at 11:54 am

Of course, the city once tried to put an electrical substation here. There have been other times the school was treated like it was just empty and could be taken over. What is it about City Council that they think we're a remote and exploitable outpost? We need adjacent amenities. The Fry's site should become a community center and community maker space, maybe even with a city pool the kids can reach on this side of town by bike.

Council is disproportionately north pa - there should be a restriction that half must come from south of Oregon since half or more live there and we are chronically shafted by City employees. (Who are one day in for a rude awakening when they've overdeveloped away enough residents - who do they think is going to pay their pensions if they keep favoring development interests who don't at the expense of residents?)

Report Objectionable Content
Email Town Square Moderator
8 people like this
Posted by Go, Vincent!
a resident of Evergreen Park
on Nov 25, 2017 at 2:38 pm

Vincent Zhou is a shining example of determination, grit, and grace.

We're rooting for you, Vincent!

DTN Paul is a registered user.


Does the northern bias of our city council really exist? What are the primary examples of this bias? Why would they be biased in this way? I find the whole sentiment very hard to understand.

Report Objectionable Content
Email Town Square Moderator
6 people like this
Posted by Thoughts of Secession Again
a resident of Another Palo Alto neighborhood
on Nov 25, 2017 at 11:44 pm

You can begin learning some of the history from longtime residents like Doug Moran, who summarized in a July blog post

"One of the persistent problems in Palo Alto politics is a strong North Palo Alto bias. ... The city has a long painful history of its North Palo Alto political elite being uninterested in even learning about conditions in the rest of the city, often to the extent that they projected a sense that the "hinterlands" was so irrelevant that it might as well not exist. "

I've given some examples above. Imagine the City deciding to plunk an electrical substation in the middle of the Lucie Stern courtyard. It's a double standard.

City amenities and access to City government are centered in north PA, and overdevelopment has had greater impacts in the south. It wasn't as bad when one could zip downtown in 15 minutes. But trips downtown and back can now take 45 minutes each way. Now that all the great retail areas have been decimated, not that we even try as much. We have been seriously impacted by overdevelopment in terms of our family time, quality of life, productivity, etc. Downtown may as well be a different town now. We have nice city pools on the other side of town that my family and others effectively has/have no practical access to anymore, to the detriment of our youth on this side of town, especially since fewer can afford to join a private club.

That doesn't really answer your question, which you could answer yourself if you make a little effort, but the way you have asked indicates the kind of lack of interest Moran describes. He has written about that issue, perhaps you can speak with him. And also the publisher of the Weekly who has witnessed the long history of dominance by north residents in City Hall. If you don't understand where that relates to bias, you may wish to study some of the underlying reasons for representative democracy.

One of the structural issues is that northern residents are generally wealthier and Council is not a paid position.

We have a city called East Palo Alto; why not another called South Palo Alto? Then all the whiners can take charge of their own city, have their OWN city council, community center, downtown, etc., etc.