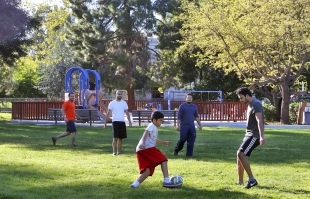 Employees at Instart Logic, play soccer with neighborhood kids at Boulware Park in Palo Alto on March 28, 2017. The city could benefit from a parks bond on the state's June 2018 ballot. Photo by Veronica Weber.

I note the stronger language on Sea Level Rise. What is the status of the feasibility study on addressing tidal flooding and Sea Level Rise that Palo Alto funded the San Francisquito Creek Joint Powers Authority to perform. This report is overdue. Several years ago, I requested that the Planning and Transportation Commission add this project to the Capital Improvement Program, a request adopted by the PTC and the Council. However, the project has fallen behind. And that delays the Environmental Impact Report process, which is a prerequisite to getting a shovel-ready project that can be funded. So Palo Alto needs to step up its act in addressing Sea Level Rise as well.


How much time do we have before the tides rush in, and specifically into my back yard? Does this demand a Zuider Zee sized project? Come on all you taxpayers at local, state, and federal levels...help us folks out here in PA with this impending danger/disaster. Oh, wait, so it might not happen in this century?? Well, in that case just forget about it! Okay, of course I jest a lot just to liven up the online conversation.

But, CC should be diligent in dealing with the immediate and current problems confronting us here in PA. They are well known and seem to get lots of online commenters' attention with their droning posts, sometimes snarky, both pros and cons. All those issues will come up again and again long before the sea level issue rises again, or even before the sea itself rises very much. CC is still groping (maybe I shouldn't use that word based on recent revelations) for answers to the immediate problems, even when there are no clear and easy solutions. Affordable housing (oh, how I wish I knew what the definition of those words really meant here in PA), transit/transportation, parking, etc. "Quality of life"? That's an oft used phrase, but with different meanings for different people, maybe depending primarily on age and how long you've lived here. We had it then, at least I thought we had it then, oh so many years ago, and now it's gone...gone forever and for many reasons, and it won't be coming back. For all the good intentions, attempts, and actions taken by CC to preserve retail, it won't be, if it ever happens, retail like us old timers remember it. Big box stores and online sites, Amazon, and hundreds of others, have pretty much killed it. And when you can buy all your flower needs at any local grocery store, how can florist shops compete and survive with that?

Oh, yes, as election time approaches next year, candidates will give us their best shot at answering the tough questions. Campaign ads and lawn signs will spring up. Heartfelt promises will be made again about how they will solve our problems and why they couldn't solve them during their current term in office. That might be a hard selling point for the current majority.

My free advice...do due diligence! Go back to when they ran for office before and check out their records...how many of their promises have been fulfilled? I'm not trying to be mean...I just want them to be accountable, and especially those on the majority side who had their say for a year now. And if any of them concede that it is a regional problem and that our great town (that's how I will always refer to it) of Palo Alto can't solve all of them alone, they will get extra points and a second look from me.