Stanford's Lutz looking to go out a winner in volleyball 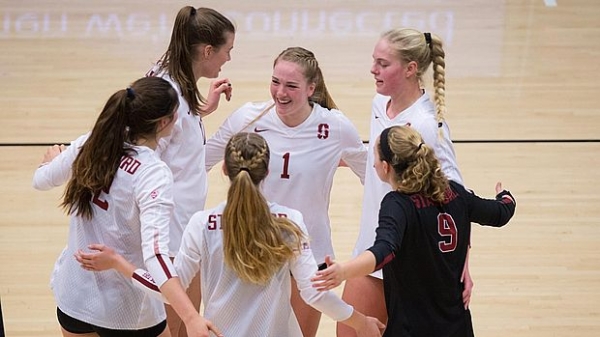 Merete Lutz is more than happy to spend a fifth year with her Stanford women's volleyball teammates. She's having fun, playing well and, for the first time, experienced an outright Pac-12 Conference championship.

She'll be playing her final regular-season home game with the Cardinal (24-3, 17-1) on Wednesday when No. 15 Utah visits Maples Pavilion for a 6 p.m. conference match to be televised on the Pac-12 Networks.

Christine Alftin/Kelley Cox,klfc photos
Lutz, a Dallas native and Houston resident, has recorded 1,169 kills during her stay at Stanford, ranks eighth in career blocks with 482 and seventh with a .351 hitting percentage.

She recorded her season high in kills with 21 in a five-set victory over UCLA last week. She's reached double-digit kills in 10 of her past 13 matches and has 15 overall.

Lutz, a three-time All-American, will be the only senior honored.

Stanford has clinched the Pac-12 title but its still playing for a national seed, hopefully among the top four, which would keep them at home, where the defending national champion Cardinal is 12-0 on the year. Stanford is 12-1 all-time against the Utes.

Stanford can match its best conference record since going undefeated in 1997 by winning out. The Cardinal closes the season at California on Saturday at 7 p.m.

Volleymag.com reported that Bears coach Matt McShane was not with the team last week and is on a leave of absence for the rest of the season. Stanford grad Spencer McLaughlin, part of Stanford's men's volleyball national championship team in 2010, is on the Cal coaching staff.

Woodside grad Christine Alftin will be playing her final collegiate match for Cal against Stanford. She's been one of Cal's best players during her tenure. She's one of six seniors who will be honored on Saturday.

These local restaurants are donating meals to Bay Area residents in need. Here's how to help.
By Elena Kadvany | 6 comments | 11,075 views

Coronavirus: Plan ahead now for a big outbreak
By Diana Diamond | 18 comments | 4,085 views