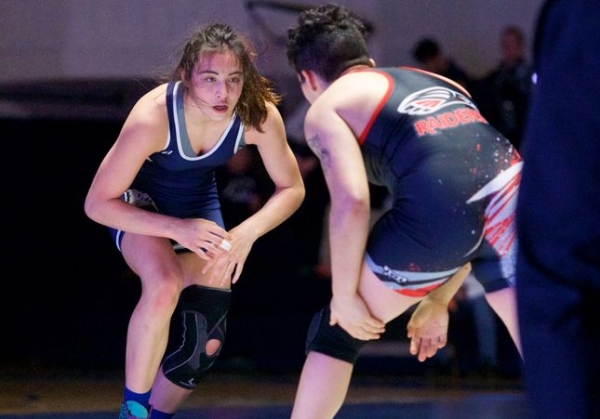 The seventh-ranked Menlo College women’s wrestling team had a big day in Missouri, placing second out of 45 teams at the annual Missouri Valley Open.

The Oaks finished behind No. 3 McKendree University and ahead of three higher ranked teams.

The returning All-American, Solin Piearcy, had an absolutely dominant day on the mats en route to her first tournament win of the season.

Piearcy began the day by pinning her opponent from King University in just over five minutes. She then ran off four consecutive tech fall victories, three of which she did not surrender a point.

The Oaks also had three others finish second. Dionnica Tolliver finished second at 123 pounds. She won her first two matches by 10-0 tech fall and then pinned her opponent from Ottawa University in the quarterfinals.

She earned her way to the finals with an 11-0 tech fall over the nation's second-ranked wrestler to earn a spot against Brenda Reyna of McKendree.

Reyna, ranked fifth in the nation, pinned Tolliver in the finals.

Iman Kazem was second at 155 pounds. Kazem, ranked second at 155 this year, used two tech fall wins, a pin and a hard fought decision to draw a matchup with No. 1 Niauni Hill of Lindenwood Belleville in the finals. Hill won.

Menlo’s sixth-ranked Precious Bell was second at 170 pounds. She won via tech fall, a decision, and two pins to set up a championship match with fourth-ranked Brittany Marshall of Wayland Baptist. Marshall took first place.

Despite being a game of ebbs and flows, it can be so difficult for a team to overcome a hot start from another team.

That was the case on Saturday night for Menlo College, as they were the aggressor coming out against CSU Maritime.

The Oaks remain perfect at 5-0 while the Keelhaulers fall to 5-4 overall.

After shooting under 40 percent in two defeats, Menlo came out shooting under 35 percent in the opening half before kicking it into gear during the second half and pulling past UC Merced 83-73 on Saturday night. The Oaks improve to 6-2 on the year while the Bobcats dropped their third straight and fell to 2-3.

These local restaurants are donating meals to Bay Area residents in need. Here's how to help.
By Elena Kadvany | 6 comments | 11,091 views