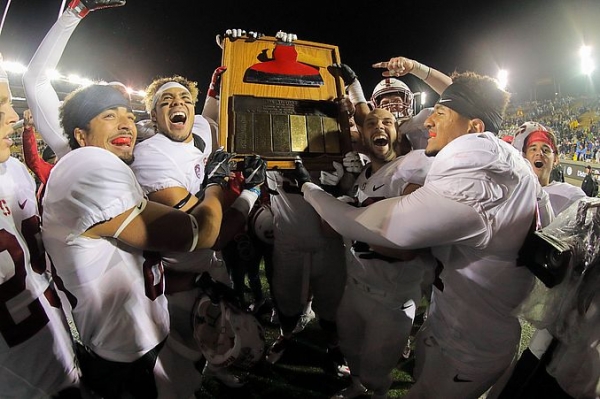 Stanford seniors would like nothing better than to keep the Axe at Stanford for another year. Photo by Bob Drebin/isiphotos.com. 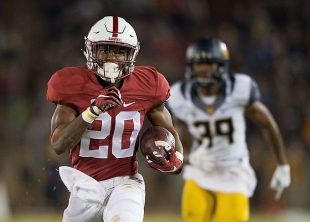 Stanford quarterback K. J. Costello wasn't sure he would be playing with Heisman Trophy candidate Bryce Love in the second half of an eventual victory over Washington last Friday.

Love gave every indication he might not be able to walk normally.

Frank Buncom recorded 11 tackles, including a key fourth-down stop, in Stanford's win over Washington.m Photo by Al Chang/isiphotos.com.
"I saw him struggle in the first and second quarter, wincing in pain," Costello said. "Then he comes out after halftime ..."

Love rushed for 43 yards on 13 carries, his longest an eight-yard gain, and scored a touchdown and limped into the locker room with Stanford trailing, 14-10.

He came out a different man in the second half, rushing for another 123 on 17 carries. He ripped off a crucial 35-yard run in the fourth quarter that allowed Stanford to run out the

clock in Stanford's 30-22 victory over the Huskies.

"I don't know what he's got inside," Costello said, "but it's something crazy."

It's crazy, all right. Crazy enough that despite missing a game and being held to a season-low 69 yards (52 on one play) in a loss to Washington State, Love regained the national lead in total rushing yards and helped boost the Cardinal's chance of winning the North Division and a spot in the Pac-12 Conference championship game.

The victory over the Huskies was the first step.

"We've learned not to ask him if he's OK," Stanford coach David Shaw said of Love. "He's always OK. He can play through ridiculous pain. He's amazing to watch. Even at 80-90 percent he's still faster than most. It's unbelievable."

He's first in the nation with an average of 180.2 yards per game. He's had a run of at least 35 yards in every game this season.

This week, there's Love and The Big Game, with the Stanford Axe Trophy up for grabs. It remains a special game to all involved.

Shaw has never lost a Big Game as a coach. He also played in the Big Game.

"It means a lot. It's a rivalry game," Shaw said. "We talk to our guys all the time about having tangible evidence, about having a trophy. It's always great to play for your pride, your family, your teammates and your school. But it's great to have something to hold after the game. The challenge is for the seniors to keep the Axe."

First-time participants may hear stories but there's nothing better than to go through the experience.

Costello grew up in southern California but he came to appreciate the value of the Big Game as a college football fanatic growing up.

"Just the title 'Big Game,' it's cool," Costello said. "I was watching Andrew Luck back in the day. I'm entirely aware of what this game holds. It's a dream come true for me to be playing college football. Every game is a big game."

Cardinal safety Frank Buncom IV sensed the importance of the week early on.

"It's huge. It's an honor to be part of a storied tradition," Buncom said. "You can see it all over campus. You never look past a rivalry game. Our focus is on the game and keeping the Ax for the seniors."

Buncom led Stanford with 11 tackles and forced a fumble against Washington. He and Bobby Okereke (10 tackles, a forced fumble, two sacks, four tackles for a loss) have been revelations lately, playing inspired football.

"We recruited him as a corner. He's smart, cerebral," Shaw said of Buncom. "We wanted to take a look at him at safety and the first day back there it was where he was supposed to be. He sees the whole field. We found a safety by accident."

"A safety got hurt and coach said 'why don't you go out and see how it feels,'" said Buncom, who played one game as a safety in high school.

"Playing the angles is the biggest adjustment," he said. "As a corner you're looking outside in with the running game. As a safety it's inside out. I made my strides there."

These local restaurants are donating meals to Bay Area residents in need. Here's how to help.
By Elena Kadvany | 6 comments | 11,064 views

Coronavirus: Plan ahead now for a big outbreak
By Diana Diamond | 18 comments | 4,080 views