SHP girls are putting the volleyball pieces together 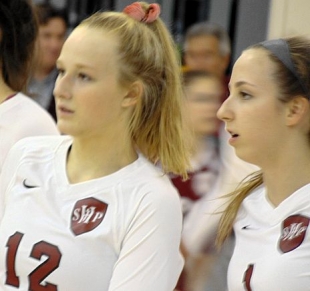 The Sacred Heart Prep girls volleyball works like an integrated system, bringing the best parts of their skill sets into play to form something bigger than the sum of its parts.

It's a conscious decision that starts with the Gators coaching staff, led by Allison Magner.

Alexa Bartlett
"When you play for each other, it's amazing what starts to happen," Magner said after Sacred Heart Prep took care of business Wednesday night in the opening round of the NorCal Division II tournament with a 25-16, 25-15, 25-21 victory over visiting Del Oro. "We've talked all year about how this is a gritty little group who cares for each other."

The four seniors, outside hitter Cate Desler, setter Haley Martella, libero Caroline Caruso and defensive specialist Celia Charleton, provide a foundation from which has intuitively grown a successful group, feeding off each others strengths and smoothing over mistakes.

"We have the seniors in critical positions," Magner said. "They truly lead through their actions. They represent 'Gator volleyball.' We wouldn't be where we are now without them."

Third-seeded Sacred Heart Prep (26-8) currently finds itself in the second round of the Northern Regional of the state Division II tournament.

The Gators, who play their home games in Spieker Pavilion on the middle school campus, host Nevada Union at 6 p.m. Saturday.

The sixth-seeded Miners (34-13) needed five sets to get past No. 11 Chico. They finished third in the Sierra Foothill League, which also includes Del Oro, league runner-up Granite Bay and league champion Oak Ridge.

Nevada Union, like the Gators, finished second in its section final. The Miners opened their season 9-1.

Sacred Heart Prep did get healthier, welcoming junior Ally Poverari in her return to the lineup. She missed the CCS tournament due to an injury and started practicing again on Monday.

Poverari, an excellent server, was limited to front row play against Del Oro. Eliza Foley, who filled in during Poverari's absence, continued playing a solid back row and chipped in with a pair of service aces and a pair of kills.

Desler recorded 15 kills and is nearing 600 for the season. Sophomores Elena Radeff and Reagan Smith combined for another 14 kills.

"We started to peak the last quarter of the season," Magner said. "We've emphasized that it's a long journey. That to go far it has to be everyone together."

A different seeding system was used to determine the Northern California brackets than in the past, which is why Sacred Heart Prep found itself in Division II instead of Division IV and why two CCS Division champions dropped divisions.

It was a long, drawn-out meeting that ultimately put together groups of team similar in strength, which made for more competitive first-round matches, including a few upsets.

These local restaurants are donating meals to Bay Area residents in need. Here's how to help.
By Elena Kadvany | 6 comments | 11,081 views