On the Table events to spark community conversations in Palo Alto, Silicon Valley 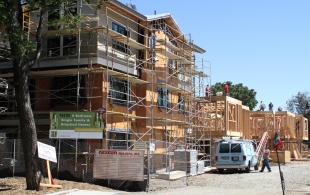 Single-family homes under construction at the site of the former Palo Alto Bowl on April 17, 2013. Palo Alto will be hosting four discussions on the lack of affordable housing on Wednesday. Weekly file photo.

Yes, there is a housing crisis. Our neighborhoods, schools, stores, parks, and roads are overcrowded and its making all of us miserable. Cities can and will do things to improve our current condition, but the nature of the problem requires complex structural changes and these will be slow to arrive.

There is another solution which is rarely discussed. Silicon Valley companies blindly insist on calling the peninsula home. If they took and honest assessment of this position, they will realize that they will be better off to keep an appropriately sized presence here, and then shift the balance of their operations somewhere else.

There are many great places to choose from. Regions with cities officials who would love to see an influx of tech jobs. Places with great communities, schools, and where your housing dollar goes fives times further and a 10 minute commute is the normal.

Some companies are doing this now, but more can and should. And Palo Alto and her sister cities should help. We should seek out and solicit new home for our companies, find the mayors who will work with private sector to make relation easy for business and for people looking for a better quality of life. Better that what they have now. Better than what they here.

Jay ess is a registered user.


When the single occupancy hotels in SF disappeared the streets became filled with homeless people. Maybe we need structures which workers could find a room in rather than commute hours into this area or live in campers on the street.
Small apartments with lower rent that workers could afford. We don't need huge apartments for thousands of dollars/month. Traffic could really improve if the commute is shorter. some folks are driving for hours to get here and have to rise before dawn.
Maybe we should be thinking of a new kind of housing.

Report Objectionable Content
Email Town Square Moderator
17 people like this
Posted by Resident
a resident of Another Palo Alto neighborhood
on Nov 14, 2017 at 4:47 pm

I don't believe the crisis is a housing crisis.

There are solutions to parts of these crisis, but they are not being discussed. We need highly efficient transportation from outlying areas to the Peninsula. We need to get rid of all the separate transit agencies and merge them into one with an agenda to serving the public, not to continue the status quo. We need to get carpool type parking lots at highway onramps with regular dedicated shuttles to business areas.

We need to look at quality of life issues as being a priority. People need to be able to get and do the necessities of life (medical/financial/personal care/regular shopping) and the R & R of life without getting stuck in traffic or not being able to park. Kids need places to play, schools need to not be overcrowded, and all of us need some types of entertainment and relaxation.

Living in the sardine can that our CC want is not going to be retaining our quality of life. Midtown Safeway cannot be the only chain in town. Amazon cannot be the only way to get school supplies and other essential non-grocery items. Parks cannot take on more sports teams for kids and adults. Group picnic sites cannot continue to take the place of the backyard family cookout or the birthday party inviting the whole class.

The reality of quality of life issues in Palo Alto are being ignored and that cannot be allowed to happen.

Report Objectionable Content
Email Town Square Moderator
6 people like this
Posted by short notice
a resident of College Terrace
on Nov 14, 2017 at 9:24 pm

With one day's notice and an 8:30-10 am time, do they really expect to attract anyone who works to attend the conference??

Report Objectionable Content
Email Town Square Moderator
9 people like this
Posted by THINK
a resident of Another Palo Alto neighborhood
on Nov 14, 2017 at 10:30 pm

@New Perspective,
Spot on. Have you seen this?

Web Link
"The high density of jobs and population, its short trip distances, its extraordinary transit system and its high transit market share would seem to make Hong Kong a poster city for the jobs – housing balance ("self containment") that urban planners seem so intent to seek. The data indicates no such thing."

And this?
Web Link
Hong Kong is creating 4x6 living spaces called coffins that 200,000 people are living in and still they have a "housing crisis" and unaffordability. This despite 30 percent of residents living in public rented housing and their having nearly 90% public transit usage and the best transit system in the world. And the densest wealthy urban place.

There is no scenario between us and Hong Kong where building more, creating more density, etc, is going to result in more affordable housing. That ship has long sailed. Furthermore, continuing to transform this area into an ever denser cityscape that the infrastructure already cannot support will only result in companies entrenching here and continuing the imbalance, as Hong Kong demonstrates. The difference is that the US is vast with many areas that have lost population in recent years.

Comoanies like Palantir find it easier to try to turn places like Palo Alto into their own private company towns, and they want exceptions in order to build short-term rental housing for their workers - this will never be cheap housing, it will not create affordability, it is simply another way for companies that should be moving to where they can expand to instead take advantage of what the public built.

We have to stop being so laissez faire about that side of the jobs housing imbalance. The only way to solve the "crisis" is to multiply the number of job centers around the country. We have to make public investments to increase the number of desirable places, which gets companies relocating to those places. Look at Boulder and San Antonio. This country has a long list of beautiful places that have had an exodus of workers, but would turnaround with the right public investments. This is why corporations shoukd consider paying their taxes as a civic duty, because there is a long history of public investment that enabled their success - the roads, bridges, airports and ports, sanitation systens, education systems for their qualified workers, public health systems, etc etc etc - there is a reason they did not move to Somalia to start up. But when they become successful, they should contribute to the ongoing success and opportunity, by paying back what no one can invest up front save the public.

We have to start thinking about how to create more job centers, or at least biting the bullet and preventing companies from creating this imbalance. They can move like Facebook did to grow. Stanford is expanding, and they were here first, and cannot pick up and move like companies can. Their presence stabilizes our local economy when the inevitable busts hit, whereas overdevelopment of overcrowded office space, particularly where it crowds out resident retail, will hurt the local economy much more during downswings. We don't even have a business tax. Palo Alto is not benefitting from these overcrowding of growing companies, and Stanford will remain a source of innovation. We should prioritize that, and residents, and safety.

Existing residents have taken a serious hit to commerce, quality of life, the environment, time, stress, health, air quality, etc etc, with no end in sight, and people who just want others to bear the cost of creating their company towns have co-opted affordable housing advocates, for all the good it has done (not). The thing people aren't looking at is the loss of time, productivity, and the hit to commerce and safety that all this maxed out infrastructure causes. Again, as Hong Kong demonstrates, all these tired backward-looking calls for bigger transit and greater density will never create affordability. Only increasing the number of job centers where people can find good work will. In a world of increasing population, keeping the number of job centers the same but growing them will NEVER allow for affordability, because supply will never keep up with demand.

Hong Kong represents the proof that blows up all those company-town-serving theories: if we won't increase the number of vibrant centers of commerce, going denser, building more and more, building smaller, building near transit, lovpcating workers as near as possible to their jobs - none of that ever creates affordability, it just hurts quality of life and creates misery. We do not have to accept that here, but we have to be proactive or that's where this will keep heading.