Police: there have been no other similar robberies recently 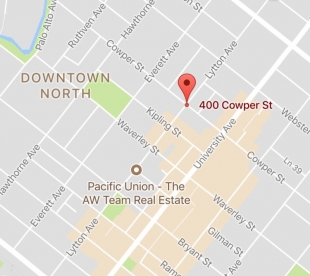 A woman sitting in her parked car in the 400 block of Cowper Street was robbed by a man who took off with her cellphone and fled south on University Avenue on Nov. 10, 2017. Image courtesy Google Maps.

“She described the suspect as a black or Hispanic man of an unknown age’ and yet the Palo Alto police is unable or unwilling to produce a sketch? That’s a poor excuse... Hispanic and African American are now placed on notice. Especially if thier wearing a ‘“do rag’ Web Link [Portion removed.]

Can’t just tell the public that some guy robbed her without description. And she was likely petrified and it was dark so any sketch would be inaccurate anyway. Remember how off-base the Unibomber sketch was? Probably not, you are probably too young.

Palo Alto Online is biased towards liberal postings but that’s not good enough for some. So typical. It’s always a no-win with you guys.

Does anyone know where we can find the crime stats for Palo Alto? Do they break such things down by race, gender and ethnicity -- or whether the perpetrators are residents of the city or come from outside of the community (and where)?


Report Objectionable Content
Email Town Square Moderator
15 people like this
Posted by @PAFreePress
a resident of another community
on Nov 12, 2017 at 11:47 am

Nayeli, Palo Alto police website on crime stats. We’ll let your own fingers do the exploring rather that point out the way... Race and gender. City council put the brakes on that one... Claiming budgetary constraints. But in reality, it was a cover-up to hide disproportionate profiling data of minorities. You read about that in the police auditor reports....found online as well...

Report Objectionable Content
Email Town Square Moderator
4 people like this
Posted by @PAFreePress
a resident of another community
on Nov 12, 2017 at 11:55 am

Paly Resident O yes Ted... read his entire manifesto.... brilliant manthematician. Police sketch? Now if this was some politician you would bet your bottom dollar the police would provide a sketch.... There just lazy.

Sheri Furman is a registered user.


Curious. Are people just wandering around downtown waiting for opportune moments to rob someone? Armed, no less.

Report Objectionable Content
Email Town Square Moderator
6 people like this
Posted by musical
a resident of Palo Verde
on Nov 13, 2017 at 8:13 pm