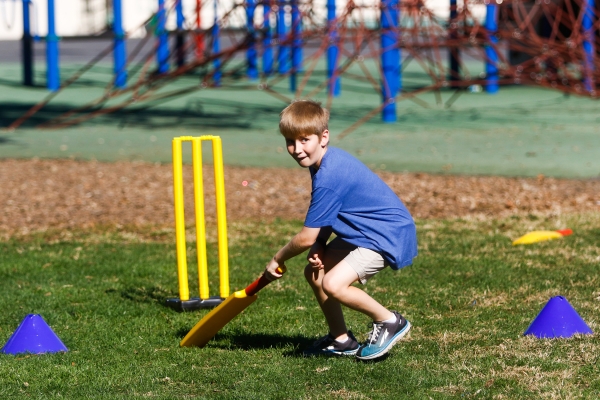 Sam Stoltenberg, gently taps his bat at the crease to earn run points during a game of cricket taught by Ken Denton at Walter Hays Elementary School. Photo by Veronica Weber. 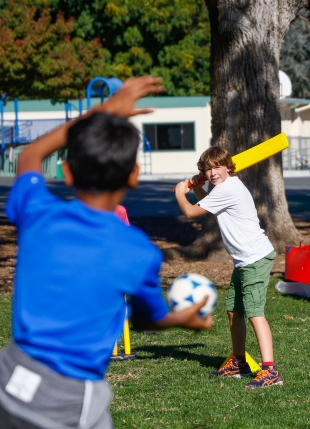 You have two sides, one out in the field and one in. Each man that's in the side that's in goes out, and when he's out he comes in and the next man goes in until he's out. When they are all out, the side that's out comes in and the side that's been in goes out and tries to get those coming in, out. Sometimes you get men still in and not out.
When a man goes out to go in, the men who are out try to get him out, and when he is out he goes in and the next man in goes out and goes in. There are two men called umpires who stay out all the time and they decide when the men who are in are out. When both sides have been in and all the men have been out, and both sides have been out twice after all the men have been in, including those who are not out, that is the end of the game

Oh, and everything stops for tea.

Yawn. As a spectator, cricket is the most boring game I've ever had to watch - like watching paint dry. Only thing worth going for is tea at the interval. Go late, leave early.

Report Objectionable Content
Email Town Square Moderator
5 people like this
Posted by Venkat
a resident of Jordan Middle School
on Nov 10, 2017 at 1:07 pm

Report Objectionable Content
Email Town Square Moderator
5 people like this
Posted by oh well
a resident of College Terrace
on Nov 10, 2017 at 1:17 pm

Baseball, hot dogs, apple pie and Chevrolet. What will we lose next?

Report Objectionable Content
Email Town Square Moderator
2 people like this
Posted by Howzat
a resident of Palo Verde
on Nov 10, 2017 at 10:23 pm

Report Objectionable Content
Email Town Square Moderator
2 people like this
Posted by Cricket fan
a resident of Midtown
on Nov 11, 2017 at 4:50 am

Boring? Have you ever tried to make a beer snake? A crowd favorite at the cricket; stack the empty beer cups together, turn them sideways and see if you can work together to make a loop around the field. Not enough cups??.... drink more beer!

Report Objectionable Content
Email Town Square Moderator
2 people like this
Posted by Cricket is prohibited on the Jordan field
a resident of Duveneck/St. Francis
on Nov 12, 2017 at 3:10 pm

Cricket is prohibited on the Jordan field is a registered user.


In a bit of irony, the "Prohibited Activities" sign at Jordan Middle School field says Cricket is prohibited.