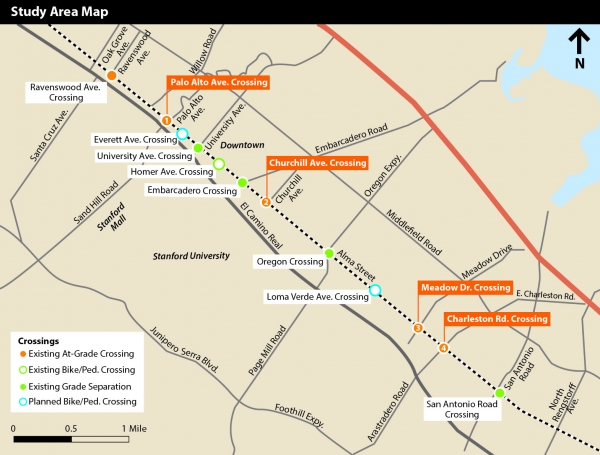 Palo Alto is exploring a variety of options to separate railroad tracks from local streets at four intersections in the city, a project expected to last several years. Map by Kristin Brown. 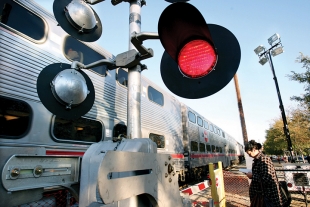 Palo Alto city staff are looking to narrow down options to separate railroad tracks from the city streets as the high-speed rail and Caltrain's electrification projects are underway. Weekly file photo.

The population of Palo Alto is about 67,000. $1.15 billion divided by 67,000 is $17,164 per person (including children). That is almost $70,000 for a family of 4. Is your family and all your neighbor's families willing to pay your share for the $1.15 billion train trench? A tunnel instead of a trench will probably double that price. In comparison, elevating the train tracks would cost a small fraction of the price, in addition to being completed much more quickly.

I agree with simple math. Why don't they build elevated tracks with sound walls? Or have the roadways tunneled (despite acquiring some nearby properties via eminent domain)? It would be much cheaper than a trench that runs through most of the city.

If O($1B) really is the number, then, yes, I'm willing to pay my share -- over an appropriate length of time-- that is what bonds are for. Below-grade railroad tracks would be a large enhancement to the city.

Report Objectionable Content
Email Town Square Moderator
3 people like this
Posted by EFS
a resident of Crescent Park
on Nov 9, 2017 at 3:57 pm

Questions, to which I do not advocate any particular answer:

1. Can the proposed grade separations be usefully talked about separately or should this issue be considered a single "package"?
2. Do we need grade separations at all four of the current grade-level crossing? What would be the traffic impact of converting any one or more of them to bicycle-pedestrian overpasses?
3. Can Palo Alto actually build a trench if neighboring communities do not also?

Report Objectionable Content
Email Town Square Moderator
8 people like this
Posted by Not that easy
a resident of Old Palo Alto
on Nov 10, 2017 at 12:49 pm

@ Simple Math - Mott MacDonald studied a trench for Charleston and Meadow. By using some design variances, the price dropped from about $1.05 billion to $490 million. That's a big difference - and that is the price of 2 grade separations together.

The details matter. Caltrain can travel at a 2% grade but we must ask for a variance. Freight trains can also handle 2% and HSR (if it ever comes) can handle even more aggressive grades.

There are no easy answers, but it is important to look at how assumptions drive up the cost.

In 2008 - the High Speed Rail Authority claimed it needed 4 tracks the entire way from SF to SJ. Their assumption was 12 trains an hour in each direction! When the details were probed, it was clear they would never run that many trains and the Authority had to scale back their plans to 4 trains per hour (what is now known as the Blended System).


Report Objectionable Content
Email Town Square Moderator
14 people like this
Posted by Ahem
a resident of Another Palo Alto neighborhood
on Nov 10, 2017 at 8:42 pm

Does anyone have any imagination?

Try to imagine a 14 foot clearance for trucks. Above that another 5-6 feet of bridge span structure to carry the weight of freight trains. On top of that another 14-16 feet of CalDOT style banal cinder block sound walls.

By the time this project got the ok, it would be double or triple the cost. Only two options...close the tracks or live with it.

Report Objectionable Content
Email Town Square Moderator
8 people like this
Posted by Me 2
a resident of Old Palo Alto
on Nov 13, 2017 at 12:58 pm

Not an option. The trains aren't going away, period.

Report Objectionable Content
Email Town Square Moderator
8 people like this
Posted by Round Tables to prevent consensus
a resident of Midtown
on Nov 14, 2017 at 3:49 pm

If they are going to have people sit at several tables with staff taking up some of the seats, the purpose of such an arrangement is to prevent the attendees from hearing what many of their fellow citizens think.
The purpose is to prevent a consensus from developing.
The staff controls the conversation. The city has used this device in the past.