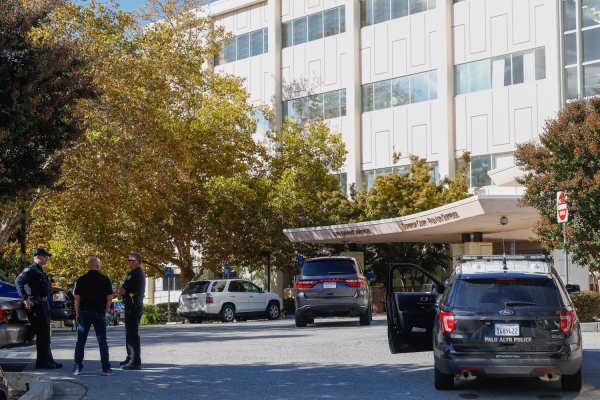 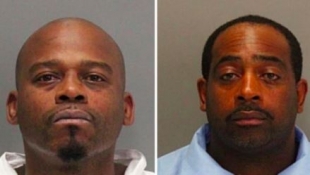 • Update: One of two inmates who fled from the Palo Alto courthouse was recaptured on Nov. 21, 2017. Read the story here.

The Santa Clara County Sheriff's Office is offering a $25,000 reward for anyone with information that leads to two inmates who escaped from the Palo Alto courthouse on Monday morning.

Tramel McClough and John Bivins, both of East Palo Alto, fled from the courthouse on Monday, triggering a manhunt. Marquita Kirk of Sunnyvale and Rene Hunt of East Palo Alto have been arrested for allegedly assisting the duo, who remain at large and are considered dangerous, sheriff's officials said.

Kirk, 44, was arrested at about 5 a.m. on Tuesday at her home in Sunnyvale, according to the Santa Clara County Sheriff's Office. According to investigators, Kirk had been in a romantic relationship with McClough.

"She rented the U-Haul and placed it in the area of the escape," Sgt. Rich Glennon, a spokesman for the Sheriff's Office, told the Weekly.

In addition, investigators arrested 54-year-old Hunt and booked him into county jail around 7 p.m. Tuesday for alleged conspiracy and being an accessory to the escape, according to the Sheriff's Office.

Hunt was described as a "known associate" to one of the escapees and made arrangements to bring the vehicle used by the two inmates once they left the courthouse, sheriff's officials said.

McClough, 46, and Bivins, 47, both fled from the courthouse, where they were scheduled for a hearing. Glennon said the two men were part of a larger group of inmates who were being escorted by two deputies.

During the process of being moved, McClough and Bivins somehow separated from the rest of the group, Glennon said.

Despite being restrained by chains and handcuffs, they were able to escape through the courthouse's emergency door at about 9:30 a.m. Monday, sheriff's officials said.

Investigators later found discarded restraints and a handcuff key outside the courthouse.

After fleeing the courthouse, the two inmates ran across the street into an awaiting Toyota Camry, which they then used to get to a U-Haul cargo van a few blocks away and fled the scene, according to Sgt. Reginald Cooks.

Investigators located the Camry a few blocks from the Grant Avenue courthouse. But while there was a report on Monday afternoon about a possible sighting of one of the men in Mountain View, deputies had not been able to locate the inmates, who are both doing time for robbery, false imprisonment and other charges.

According to a news release from the Sheriff's Office, Kirk was arrested on felony charges of conspiracy, and accessory after the fact. It wasn't immediately clear whether Kirk was in the Camry or in the U-Haul with the two escapees.

As of Friday morning, Kirk and Hunt have been released on bail, sheriff's officials said.

McClough and Bivins were both arrested in February on suspicion of stealing $64,400 worth of cell phones and other items from a Verizon Wireless store in Sunnyvale. Police said the two men forced the store's employees to open the store's safe, tied them up and locked them in a bathroom.

The two deputies responsible for transporting the escapees haven't been placed on administrative leave or suspension, sheriff's officials said. They each have more than 20 years of experience in law enforcement.

Anyone with information the location of McClough and/or Bivins is asked to call 911 of sheriff's office tip line at 408-808-4431.

They were looking at a long prison term. Now it will be even longer!

Yeah, at those ages, anything more than fifteen years is basically a life sentence. Now their accomplices are going away with them.

On the even brighter side, that's four more Silicon Valley apartments freed up for actual productive members of society.

To the other posters, I don’t see anything about the escaped inmates being caught. I think they are still on the run.

How could they possibly think they wouldn't be caught assisting an escape?

At the same time -

Where are the guy's that they just threw their lives away for while they are in there now?

They need to be back where they belong. Why does this seem to NOT be such a big deal?

Report Objectionable Content
Email Town Square Moderator
5 people like this
Posted by NOFIVEOH
a resident of Barron Park School
on Nov 8, 2017 at 12:40 pm

I would be curious to find out what punishment will be handed out to the officers who were charged with handling these inmates? Obviously we're paying big dollars for our officers to discharge their duty in our courts. I wonder if they were grabbing a quick coffee and donut while the inmates were escaping...sure seems like it to me.

Report Objectionable Content
Email Town Square Moderator
6 people like this
Posted by OR
a resident of Barron Park
on Nov 8, 2017 at 5:33 pm

Meanwhile, a licensed contractor has ripped off my overly-trusting, elderly mom for over $100k, burned down her 2nd house, abandoned the project and Palo Alto PD and California State Licensing Board refuse to investigate. McClough and Bivins should have been contractors!

If they are caught, give them a job with an independent contractor so they can prepare for their CSLB license. Probably will do better than having other contractors constantly scamming our senior citizens, which incidentally, they find through our senior care facilities.

Report Objectionable Content
Email Town Square Moderator
8 people like this
Posted by Donny
a resident of another community
on Nov 8, 2017 at 7:33 pm

Money talks! Especially $25k. I predict both will be caught in a few days.

Report Objectionable Content
Email Town Square Moderator
2 people like this
Posted by Resident
a resident of Monroe Park
on Nov 8, 2017 at 9:45 pm

This sounds like an easy escape! Looks like they had to take an elevator in the process of going to the hearing. How can two guards control a bunch of inmates in such a confined space! Did someone dropped the ball in the courthouse!

Report Objectionable Content
Email Town Square Moderator
8 people like this
Posted by Wow
a resident of Charleston Gardens
on Nov 8, 2017 at 10:13 pm

Report Objectionable Content
Email Town Square Moderator
7 people like this
Posted by AlexDeLarge
a resident of Midtown
on Nov 8, 2017 at 10:25 pm

Report Objectionable Content
Email Town Square Moderator
4 people like this
Posted by Illuminato
a resident of another community
on Nov 9, 2017 at 6:42 pm

It sounds like an inside job to me. Way too easy for them to slip away from the guard.

The first few seconds after awakening; before I remember the virus
By Chandrama Anderson | 0 comments | 3,273 views

Can you stay healthy without making more trash?
By Sherry Listgarten | 6 comments | 2,657 views

Think about helping others in our coronavirus-affected area
By Diana Diamond | 6 comments | 2,481 views