School board to discuss Stanford expansion 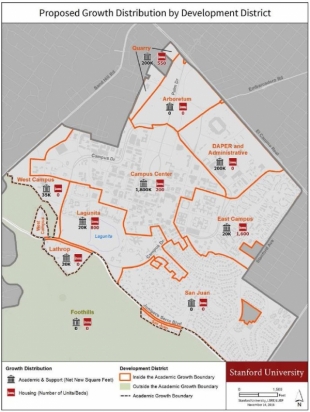 Stanford University is requesting permission from Santa Clara County to build 2.28 million square feet of additional academic space and 3,150 housing units and beds between now and 2035. A larger version of this map is posted at tinyurl.com/2018GUPmap. Graphic courtesy Stanford University.

What routes are Stanford employees and students taking that would see an increase in congestion? How about increasing public transit or shuttle busses along these routes?

3 people like this
Posted by Anon
a resident of Another Palo Alto neighborhood
on Nov 7, 2017 at 9:43 am

As part of the plan, Stanford should be required to start studying how to transport people in and out more efficiently. Stanford is banking on Caltrain, for example, but, to get into the central campus requires a time consuming rush hour bus trip. If there existed a light rail or other system that passed over or under El Camino and Campus Drive and moved people quickly to the campus center, employees would have a real incentive to take public transportation. Perhaps a subway system would make sense. The billion dollars or so (back of the envelope, not a real estimate) it would take would be well worth it to solve this part of Stanford's ingress/egress problem.