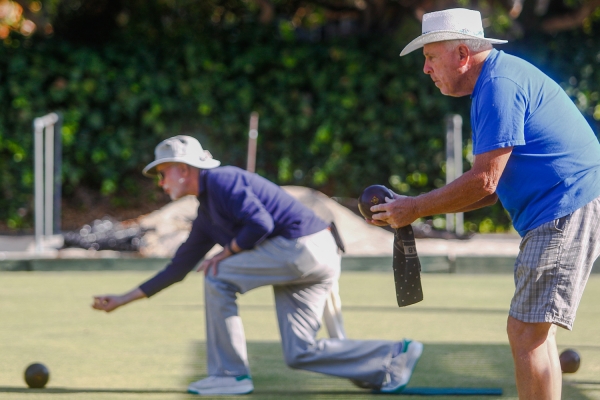 John MacMorris, left, Sam Hebert, right, bowl during a draw game on the lawn bowling green on Oct. 31, 2017. MacMorris and Hebert were the "skips" of their teams, equivalent to a team captain. Photo by Veronica Weber. 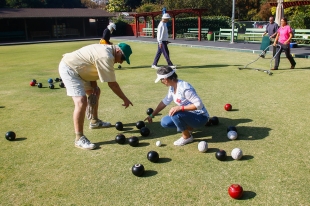 Are you sure the bowls are not round, I thought they were just weighted with a bias which means there is a great deal of skill involved to hit the jack ball. The ones I have seen look round to me but they have a dimple to show where to place the thumb for the bias.

The shoes are important as for a bowling green the soles have to be completely flat to do least amount of damage to the pristine lawn. Sneakers are OK as long as they have completely flat soles.

Sorry, is there anything more whiter than a Palo Alto Online article outlining how the attire for lawn bowling is changing? A game from the 13th century primarily played in British Commonwealths just screams diversity.

Report Objectionable Content
Email Town Square Moderator
10 people like this
Posted by Resident
a resident of Another Palo Alto neighborhood
on Nov 6, 2017 at 1:20 pm

I think that diversity means that occasionally an article about a sport played by an elderly white population shows that there are more interesting sports than football and basketball which also seem to have their own demographic players and supporters.

By all means, let's have all types of sports written up not just those followed by a subset of our population.

Report Objectionable Content
Email Town Square Moderator
6 people like this
Posted by Alice Smith
a resident of Another Palo Alto neighborhood
on Nov 6, 2017 at 10:29 pm

Lawn bowling is great fun, is multi-generational, is multi-cultural and open to anyone who wants to have a try. Sundays there are volunteers who help people try their hand. The bowls are weighted and are different sizes and weights. The Club provides bowls for learning.