Around Town: a new path; waiting for the new iPhone 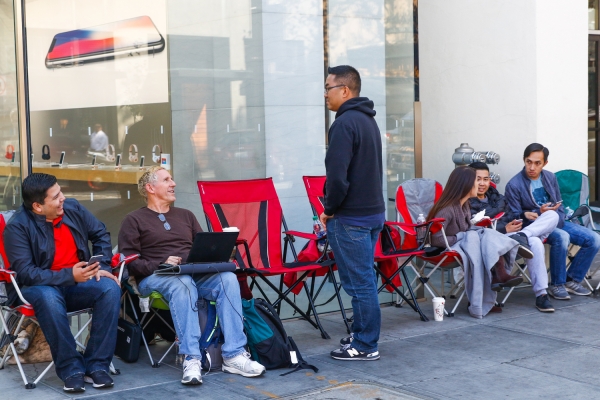 A handful of people set up folding chairs outside the Apple store on University Avenue in downtown Palo Alto on Nov. 2, 2017 to get their hands on the new iPhone X that will be released on Friday. David Casarez, far left, was the first person in line, arriving late Tuesday evening. Photo by Veronica Weber. 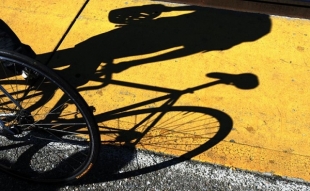 Palo Alto is looking to bring 700 bikes to city as part of a bike-share program by drawing inspiration from similar efforts in Seattle and South San Francisco. Weekly file photo.

Like this comment
Posted by Resident
a resident of Another Palo Alto neighborhood
on Nov 3, 2017 at 8:25 am

For these bike share programs to work, they need to cross city borders. They need to be available to be dropped off at places like movie theaters, high schools, and be picked up in the neighborhoods (at the parks?).

For the number of bike thefts and the requirement for maintenance, I would think that young people in particular may be a target for the efficiency of a bike share service as opposed to the cost of replacing stolen bikes and the damage/maintenance aspect taken away could make them an affordable alternative to personal bike ownership.

It can take quite a while to drive to Shoreline movie theaters, but when the tunnel is open it is a short bike ride!

Definitely in our family we have spent so much on bikes over the years that we could see it being worthwhile if the bike stations were nearby and we could leave them at useful destinations.

The problem with the old bike share system was not enough bicycles available at not enough stations. So now they want to fix that problem by limiting the number of bicycles that will be available? Does that make sense to anyone? If their concern is the availability of bicycle parking, then install more bike racks. Bike racks are tremendously cheaper than car parking lots.

I would also like to see some kind of monthly or yearly subscription program that is good for all the different bike share systems around the Bay Area. Forcing people to sign up for each program separately really discourages usage.

I agree with the previous comment that letting people bike across city boundaries is common sense. A lot of people like in one city and work or shop across the border. A lot of my friends and neighbors live in south Palo Alto and work or shop in Mountain View or Los Altos and we are perfect candidates for bike share.

We also need to open up corridors to encourage bicycling from residential neighborhoods to business districts. We badly need a direct bicycle route from Midtown to the California Ave business district. Also from south Palo Alto across Hwy 101 to Google (the current route under the highway is closed during the winter).

Report Objectionable Content
Email Town Square Moderator
1 person likes this
Posted by John
a resident of East Palo Alto
on Nov 4, 2017 at 10:27 am

Free-floating bikes!!! Hooray!! I really hope they make it happen! In China, millions of people are already using such infrastructure. I don't see why it wouldn't work here. I hope I could ride a bike from downtown Palo Alto to my place in East Palo Alto. I'm always hesitant to bike downtown, afraid to get my bike stolen.

Report Objectionable Content
Email Town Square Moderator
3 people like this
Posted by john_alderman
a resident of Crescent Park
on Nov 4, 2017 at 11:13 am

We know that's not true because the data usage showed most bikes sat unused for weeks at a time. Availability clearly wasn't a problem. You are right that lack of stations may have contributed to the fact that the program failed, but more likely there isn't a real use case for them in Palo Alto. The downtown is small enough you can walk from the train, and if you are going further than downtown, you probably don't want to bike anyway.

Report Objectionable Content
Email Town Square Moderator
6 people like this
Posted by resident
a resident of Midtown
on Nov 4, 2017 at 12:32 pm

@john_alderman - the problem with the old bike share system is the lack of bicycles. There are no stations in residential areas, so city residents cannot use bike share at all, either to go shopping or to go to work. There also no stations at major employers like HP or Facebook or Stanford or Google, so most commuters cannot use bike share either. The lack of stations and number of bicycles in the system are really different ways to look at the same problem (adding more stations without adding more bicycles is pointless). If a new bike share system limits the number of bicycles that are available where they are needed, it is going to fail just like the old system.