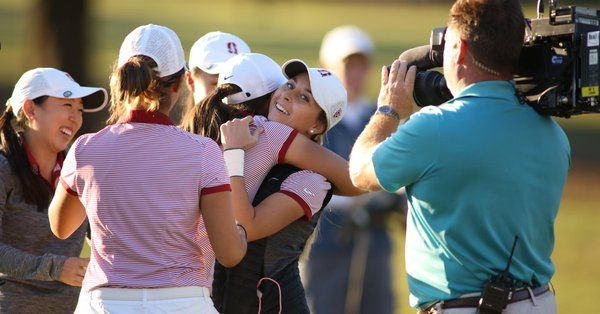 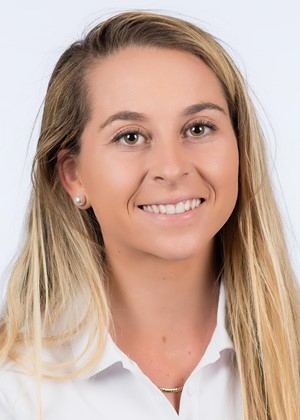 Valenzuela had to birdie the final two holes to complete the comeback after matching Roberta Liti stroke for stroke most of the day.

Albane Valenzuela
The clutch sink eased some of the disappointment from last year's 3-2 loss to the Sun Devils in the semifinals of the NCAA Championships, and sends the Cardinal into Wednesday's title match against USC. The Trojans downed Northwestern, 4-1.

"We dug a little deeper," said Anne Walker, the Margot and Mitch Milias Director of Women's Golf. "It stung a lot in May. To get a little revenge is good."

Early on Tuesday, it looked like the Cardinal might wind up there again. Arizona State won the first match and led in two others before Stanford staged a comeback. Senior Shannon Aubert made a crucial up-and-down par save from the front bunker at 18 -- drilling a 12-foot putt for a halve – to hold off Sophia Zeeb, 1-up.

"Coach always says, 'Just come out and get your point,' so that's what I came to do," Aubert said. "She (Sophia) is an incredible player with a great resume and I have a lot of respect for her game. She put up a heck of a fight, so it feels good to get a win against her."

After losing the first two holes, sophomore Ziyi Wang rallied for a 4 and 3 triumph against Madison Kerley. Wang pulled away by winning 13, 14 and 15.

"My short game was good and I didn't miss any short putts," said Wang. "She made a lot of 20-footers that gave me a lot of stress, but I just kept going, stuck to my plan and tried to make as many putts as I could."

Sophomore Andrea Lee succumbed to Lannea Strom, 1-up. Strom carded six birdies in a near flawless performance against Lee – already a three-time winner this season – and saved her best for last. Trailing 1-down, Lee squared the match with a two-putt par at 17, but Strom buried a 10-foot birdie putt at 18 to even the overall score at 2-2.

That left it up to Valenzuela and Liti on national television. The seesaw match was tight, with neither player gaining more than 1-up advantage. Valenzuela lost 14 to slip 1-down, then tied 15 and 16, making a great two-putt from long range at the latter.

She pulled even by draining a 15-foot birdie putt at 17, then almost reached the 18th green in two and lipped out her eagle chip shot.

"I hit four really good shots coming down the stretch, but I gained some momentum on No. 16 when I made my par," Valenzuela said. "So it was just about committing to each shot and staying in the present. It was great to be able to make that last putt for my team."

The all-Pac-12 championship match begins at 9:45 p.m. and will be shown live on the Golf Channel. Valenzuela goes out first against Alyaa Abdulghany, followed at 1:05 by Aubert against Robynn Ree. At 1:25, Wang opposes Allisen Corpuz, followed at 1:45 by Lee against Muni He. The final match at 2:05 pits Madie Chou of Stanford against Divya Manthena.

"I'm really happy with what my team did," said Walker. "If we can do that again, I'll be happy win or lose."

These local restaurants are donating meals to Bay Area residents in need. Here's how to help.
By Elena Kadvany | 6 comments | 11,124 views

Will the Coronavirus Save Lives?
By Sherry Listgarten | 29 comments | 3,905 views

The first few seconds after awakening; before I remember the virus
By Chandrama Anderson | 0 comments | 987 views