Letters, speeches and other irreplaceable documents burned in modular buildings 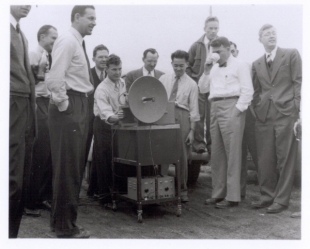 Negligent behavior. They could have scanned all the documents. I have scanned many a document, and anything you can visually read, you can copy. They are incompetent.

They should go out of business, after the owners are sued by the HP family.

I wonder if we will ever know the truth. This statement by the company disputes the thesis of this article.

"The company also disputed claims that it had not adequately protected the papers. 'Keysight met and exceeded the strictest standards for archival protection, including guidelines set by the United Nations and the Library of Congress. The archives were stored on metal shelving in archival quality folders inside damage-resistant archival boxes in a secure building with a sprinkler system at the company's Santa Rosa headquarters -- standard practice for archival collections -- and in the same way the archives were stored when they were located previously at the Hewlett-Packard and Agilent facilities. According to the Smithsonian Institute, an automatic sprinkler system is the single most important fire-safety system a cultural property can have,' the company said in a statement."


If something is worth preserving then it is foolish to place it in a facility that is located in a high fire danger area.

Report Objectionable Content
Email Town Square Moderator
2 people like this
Posted by resident
a resident of Duveneck/St. Francis
on Oct 31, 2017 at 1:56 pm

There are two major archives available in close proximity to HP and Agilent (Stanford and the Computer History Museum) to which history of science researchers have access. Why were the documents sent to inaccessibility, poor storage conditions, and incineration in Santa Rosa?

Report Objectionable Content
Email Town Square Moderator
3 people like this
Posted by Peterk
a resident of Menlo Park
on Oct 31, 2017 at 2:50 pm

"They could have scanned all the documents"
apparently BP is not fully aware of the differences between archival scanning of documents and home scanning of documents. There is more to it than just creating a file name. Each document must be indexed and the index is based upon the type of document needed. This documents are scanned at high resolution on flat bed scanners and not using an automatic document feeder attachment.
lets assume that the 100 boxes are what are known as records cartons. They hold approximately 2500 to 3000 sheets of paper or one cubit foot. with 100 boxes you have over 250,000 sheets of paper. Each document must be prepped for scanning ie remove any staples, open and flatten the documents, uncrease turned down corners, remover paper clips, etc.
once you've prepped them you can scan them, after scanning you have to QC the documents against an ISO/AIIM standard, after QC you index the image so that it can be retrieved.
this is just part of the process for archivally digitizing company records

Report Objectionable Content
Email Town Square Moderator
22 people like this
Posted by Doug McKenzie
a resident of another community
on Oct 31, 2017 at 3:33 pm

During the many years I worked at HP, it went from one of the world's really great companies to an undistinctive corporate also-ran, among other mediocrities laying off 10s of 1000s of people in a single whack. Losing decades of archives from the best of times seems at once a horrible loss, but also just a continuation of the decades-long trend.

This explains it..this is from the Keysight website on their CEO Ron Nersesian:

When Agilent announced the separation of its electronic measurement business in 2013, Nersesian was appointed Keysight president and CEO and led the launch of the new company. Keysight became a public, independent company in November 2014.

'Are they ready for fully innovative Indian food?' Ettan arrives in Palo Alto with chaat, caviar and a secret menu
By Elena Kadvany | 0 comments | 3,586 views